Our free and fearless press has for many years had to put more copy out there with ever-diminishing resources. Gone are the journalists who specialised in any particular subject, replaced by hired-in expertise, or, all too often, just lifting stories from the competition and putting them in a later edition, or tomorrow’s paper. In has come churnalism, the invasion of PR and lobby group material … and the scouring of social media. 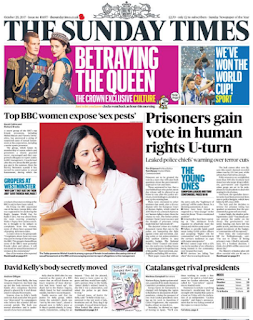 This last has reached the so-called quality press, right down to raiding Twitter feeds for stories and comments. So it should have come as no surprise that the Murdoch Sunday Times has brought its readers “Top BBC women expose sex pests” about a social media group at the Corporation. The only problem for the allegedly upmarket Murdoch goons is that the presenter the paper has placed at the centre of it all has called the claim out.

So what is the ST alleging? “A secret group of the BBC’s top female presenters, including Mishal Husain and Victoria Derbyshire, has uncovered a string of suspected cases of sexual harassment at the corporation, including a senior sports presenter … The group, which keeps its membership of senior editors and presenters a closely guarded secret, encouraged and then supported colleagues to report claims to BBC management”.

There was more: “It was formed after the row about the BBC gender pay gap in the summer. Since the Harvey Weinstein scandal it has turned its conversation to sexual harassment, during which the conduct of two men working at the BBC is said to have been raised … On Friday, the BBC suspended one of the men, George Riley”. And there alongside the article is a large photo of Mishal Husain. 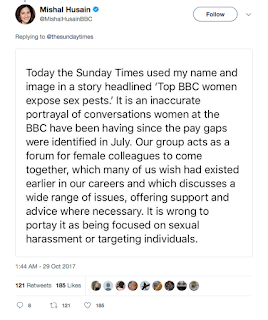 Sadly, the ST has inflated this particular soufflé well beyond the point of viability, so much so that Ms Husain felt the need to push back well before the paper’s readership would have seen the article. This is what she has had to say.

“Today the Sunday Times used my name and image in a story headlined ‘Top BBC women expose sex pests’. It is an inaccurate portrayal of conversations women at the BBC have been having since the pay gaps were identified in July. Our group acts as a forum for female colleagues to come together, which many of us wish had existed earlier in our careers and which discusses a wide range of issues, offering support and advice when necessary … It is wrong to portray it as being focused on sexual harassment or targeting individuals” [my emphasis].

So it seems the “secret group” is secret enough for the ST’s hacks not to know what it actually discusses, or indeed the group’s membership. And to add insult to injury, this story, such as it is, is the kind of abysmally bad journalism which the Murdoch mafiosi expects readers to pay for - most of the article is hidden away behind a paywall.

Pay money this for badly researched, inaccurately presented, speculative drivel? As they say in God’s Own County, I wouldn’t pay them in washers.
Posted by Tim Fenton at 12:50

There is no "quality press" in Britain or the USA.

Anybody who buys their shite deserves all the corrupt propagandist muck they get.

'...has uncovered a string of suspected cases of sexual harassment at the corporation, including a senior sports presenter …'

I hear that a sports presenter, of whom he being a sports presenter on a BBC radio channel I never listen to, I've never heard, has been this very day suspended following allegations of a sexual harassment nature.

Regarding the guy who was named, presumably if he is found to have committed sex offences then he will at the very least be sacked (and quite rightly so) but if the accused hasn't done it then I do hope that those throwing around false accusations would suffer the same fate.