A Warning From The Past

Harry Leslie Smith is 94 years old. He has one last mission to complete in his lifetime, and that is to warn those who grow up in today’s Britain what awaits them if the country dismantles much more of the welfare state that the post-1945 Labour Government put in place. In pursuit of this, he has written Don’t Let My Past Be Your Future, which is available via Amazon (HERE), or through all good bookshops. 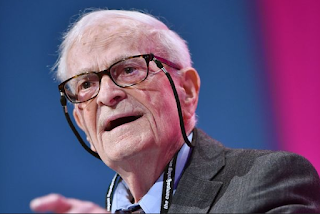 The book is subtitled “A call to arms”, although it is more of a plea that today’s young people become knowledgeable about what has gone before. There are few alive today who have first hand knowledge of a world with precious little in the way of a benefits system, and no NHS. When HLS was born in 1923, the lot of the working man was bad, and about to get much worse.

In the wake of the Great War, Britain struggled to get its returning soldiers back to work. Wages were poor, Government expenditure had suffered cutbacks, and unemployment was well advanced. Soon, a very famous figure advanced it yet further.

Winston Churchill had been unexpectedly made Chancellor of the Exchequer in Stanley Baldwin’s 1925 Tory Government. He knew little about economics, and so trusted in the judgment of his advisors, notably Bank of England Governor Montagu Norman. He did not trust in the judgment of dangerous radicals like John Maynard Keynes, who warned in his seminal book The Economic Consequences of the Peace, that demanding from a defeated Germany more in reparations than could be afforded, was dangerous.

Churchill was persuaded to put Sterling back on the Gold Standard at the pre-1914 rate of $4.86 to the £. The currency was not worth that; had the peg been set at, say, $4.40, all would have been well. But going back to Gold at $4.86 showed the world that the war had changed nothing and that Britain was still great. It was a thought, as J K Galbraith later noted, to which Churchill was highly susceptible.

The effect of going back to Gold at $4.86 had an immediate effect: the cost of exported goods was effectively increased by 10%. Steel, coal mining, shipbuilding, railway locomotives and coaches, all increased in price - just as similar industries across mainland Europe were getting back into production after the war years. While the press and financiers lauded Churchill, Keynes asked why he had done “such a silly thing”.

Unemployment increased across Britain. Industrial areas of the North, where HLS grew up, were particularly badly hit. Soon after Mr Churchill made his mistake came The Great Crash of October 1929, the effects of which swept cross the North Atlantic like a typhoon.

But there was little in the way of a safety net. Illness ravaged working communities, but even a visit to the doctor had to be paid for. Some more enlightened companies engaged a company doctor, but medicines … the worker had to pay for those.

When HLS describes a sister dying before the family’s eyes, this was not uncommon. Infant mortality was desperately high among working people. So were cancer sufferers whose families could not afford the morphine to ease their pain. Some were taken to isolation hospitals out in the country, far enough away not to hear their screams of pain.

Yes, in the 1930s there was economic recovery in Britain, but as in the 1980s, it was distinctly asymmetrical. New factories sprang up, but in and around London. While the home counties became more prosperous, the industrial North, Wales and Scotland languished. The Jarrow marches, it should be remembered, were not in the 20s, but 1936.

But, you may say, we do have a benefits system and the NHS. There is no chance of a cancer sufferer being denied end-of-life care and stripped of their dignity. But that is to misunderstand what HLS is telling his readers. He is showing the inevitable conclusion from the direction of travel on which successive Governments have embarked.

Unemployment benefit, payments to the sick and disabled, even in-work and universal benefits, all have been under sustained attack for years. Hardly a day goes by without comfortably off pundits being given a platform by yet more comfortably off newspaper proprietors and their editors to accuse the less well-off of being “scroungers”.

There has even been a sustained assault on the Motability scheme, which enables the disabled to get their own cars. In addition to the obscenely overpaid columnists, this battle is regularly joined by the alphabet soup of right-wing lobby groups: the TPA, IOD, CPS, IEA, ASI and many others queue up to tell us that whatever cuts the Government proposes, or which they urge on that Government, are “fair”.

Never has a mild-looking four letter word ended up being so loaded. The urging of this new “fairness” is proposed by well-paid young men and women for whom hardship has never been a feature of their lives. And hiding behind these front men and women are the rich and greedy, prepared to pay to see others suffer. Their only priorities are the increased enrichment that a lower tax burden and greater profits combine to confer upon them.

What is urged in this campaign of ceaseless propaganda is to embark upon a continuum which would inevitably lead back to where HLS grew up - paying for the doctor and being thrown on the mercy of families and charities when unemployment comes calling.

Health and safety is also under attack. To remove this protection is also said to be “fair”. Supposedly sensible pundits rail at the legislation, demanding “are we not grown up enough to be able to make our own decisions?” That road leads to deaths and injuries in the workplace. The latter blighted HLS’ family when his father was badly injured working down the pit. Industrial injury used to be a killer. Some would have that era come back.

Why, then, is there not a greater awareness of what HLS warns us about? For many in the comfortable middle class, there has for many years been the reassuring cosh of disposable income: you have a house, a recent model car, and are allowed a fortnight’s foreign getaway each year? Spain, Greece, perhaps Florida or that all-inclusive in the Dominican Republic? You have arrived. Don’t rock the boat. Ignore the poor.

But it does not need HLS to remind us that many in work are also in poverty, that food bank use is multiplying alarmingly, that there are more and more rough sleepers, and not just in the big cities. And he touches on one subject which we might think has been banished from Britain - that of war.

Our world is increasingly influenced by those prepared to act in an increasingly bellicose manner: the swagger of Kim Jong-un, the braggadocio of Donald Trump, the blood-curdling rhetoric of any number of idiots across the Middle East, all waving their weaponry at one another and the wider world. HLS saw the sad consequence of that as he picked his way across post-war Hamburg, a city reduced to rubble by firebombing.

And on returning to Britain after the war, he then saw a country still in the grip of austerity, despite Labour’s hope of 1945, writ large in Michael Young’s election manifesto. But the Attlee Government did not dump the burden only on the poor, and in spite of the nation’s grim financial plight, still managed to give us the NHS and a welfare safety net, as well as keeping unemployment under control.

Of course, Attlee did not keep Keynes outside the tent, as his predecessors had done, but embraced The General Theory of Employment Interest and Money for the benefit of the nation. Sadly, Keynes did not live to see his greatest achievement.

And Keynes has fallen out of fashion, faith being placed in the ideas of those more acceptable to the rich and greedy, like Professor Milton Friedman of the University of Chicago. His medicine has once again caused a recession and an asymmetric recovery, so post-industrial communities in the North, Wales and Scotland are once again left out. This time, they have been persuaded that it’s all the EU’s fault.

Britain has ended up dangerously reliant on financial services, property bubbles, and even more debt as others have retained their manufacturing capacity and become stronger and more productive as a result.

Our country has also, through the intervention of an aggressive and increasingly intolerant press, come to demonise not only those at the bottom of the pile, but anyone who can be classed as the “other”. In the 1930s, those same papers were demonising Jews. Today they do the same to Muslims, when they become bored with kicking the poor.

All of this HLS saw as he grew up in Yorkshire, and is seeing again in his old age. What he tells, with a grim candour, is of somewhere you would not want to go. But he can see that, if the relentless victimising of the poor, the refugees, those who do not speak English or dress differently, the disabled and even those of inconvenient view continues along the same path, it will lead back to where he found it.

Anyone not persuaded of the risks of believing the siren voices of selfishness and intolerance should read HLS’ book. It is about a world we may have left behind, but are in danger of seeing all over again.
Posted by Tim Fenton at 16:44

As a promoter of Thatcher and her gang of monetarist gobshites, he once said it was worth the price of impoverishing the rest of the country to protect the south east.

Then there was the "revelation" through the 30 years release of cabinet documents that Thatcher was pushing for privatisation of the NHS AT THE VERY TIME SHE WAS SAYING IT WAS "SAFE IN OUR HANDS".

Then there was a similar "revelation" that Howe, Brittan and Jenkin wanted to eliminate reference in a PR release to commitment to Merseyside as "An economic and social entity". Even Thatcher shit her reactionary self at making their hatred so obvious. As everyone knows, it was left in. But the notion was applied anyway.

And these are just a few examples of capitalism in "action". It will never change because it can't. Profit is all that matters (see Gordon Gekko and the Murdoch brat), and profit is not the same as economic efficiency.

Capitalism is an evil creed alien to everything that makes for civilised living. Humanity will make no social progress until we are rid of it forever. But there will be more wars and inflicted poverty before it is finally dumped in the dustbin of history.

Meanwhile, the south east of England will continue to be bribed and delude itself it is safe. Harry's warning will probably go as unheeded as Ken Loach's film The Spirit of 45.