For some time now, supposedly mainstream newspapers have been taking “information” fed to them by a group called News-Watch (note the similarity to the title of a BBC programme hosted by Samira Ahmed) and presenting it as authoritative research. This has now been revealed to have been a most unwise move, because News-Watch has been revealed to be yet another part of Arron Banks’ Leave EU campaign. 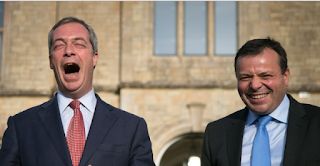 They conned the press - no wonder they're laughing

The alarm was raised over the weekend after the increasingly desperate and downmarket Telegraph told readers “The BBC invited a third more pro-EU speakers than anti-EU speakers to appear during the election campaign, a report has revealed … A survey of its news coverage during the period between May 3 and June 7 found that of 375 contributors, 189 were pro-EU or expressed negative opinions about Brexit, while just 140 were positive”. And the source for this claim? 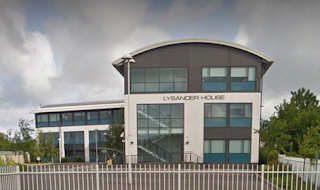 All Brexit roads lead to an empty building in Patchway

“The report, carried out by media analysts News-watch and commissioned by a cross-party group of Eurosceptic MPs … Kate Hoey, Philip Davies, Kelvin Hopkins, Philip Hollobone, Ian Paisley and Graham Stringer, as well as former Ukip leader Malcolm Pearson”. None of whom were going anywhere near Leave EU last year. They are now.

News-Watch was also quoted by - predictably - the Express, which told readers last week “Listeners of BBC Radio 4's coverage of Brexit are two and a half times more likely to hear the opinions of a pro-EU guest speaker than an anti-EU guest, a report by think tank News Watch found”. And who was backing it? “Conservative MPs Philip Davis and Philip Hollobone, Labour MP Kate Hoey, and the former UKIP leader Lord Pearson”.

The Murdoch Sun was at it too, with Miles Goslett letting the cat out of the bag in no style at all: “In July, a cross-party group of 70 MPs wrote to the BBC complaining it is heavily “in favour of those who wish to water down or even reverse the referendum decision … Their letter followed research painstakingly compiled over months by the pressure group News-Watch, which claimed that Radio 4’s coverage of Brexit was biased”. 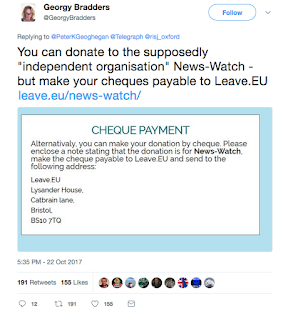 And over at the Spectator, none other than Charles Moore was also suckered by this group, citing News-Watch twice in a discussion with the BBC’s Nick Robinson. For The Great Man, it was simply “an organisation that monitors BBC bias”. Was News-Watch behind the infamous recent attack on Daily and Sunday Politics and The Andy Marr Show (tm) over the numbers of pro and anti EU guests they invited on?

News-Watch is also behind BBC Complaints, another site dedicated to undermining the Corporation. And, as Georgy Bradders has discovered, “You can donate to the supposedly ‘independent organisation’ News-Watch - but make your cheques payable to leave EU”. Arron Banks too tight to set up a separate bank account, was he? 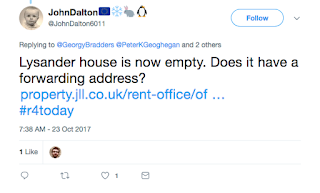 The address - a building on Catbrain Lane in Bristol’s northern suburb of Patchway - was discovered by Tweeter John Dalton to be empty. But it is the registered address of a host of Banks-related businesses, something with which the likes of Carole Cadwalladr may already be having some fun. And the conclusion for those press outlets is plain.

You’ve been suckered by phoney “research”. And forget the “we have nothing to do with Leave EU” claims. Because they do. Press and Politicians - hang your heads in shame.
Posted by Tim Fenton at 10:30

I know the answer to this: The second one is real.

Accepting input without checking out the source thoroughly is not being conned. In my opinion, it is at a minimum gross incompetence if not actual connivance.

Seems BBC's Newsnight is investigating the shady dealings of Arron Banks tonight (24/10/17) Should be fascinating, although perhaps not as much as your own research on them, Tim.