Some parts of the new media serve a very useful purpose: when they advocate for a particular point of view, or oppose one, it is clear that the best course of action for those who have brain plugged in and a hole in their backsides is to take the opposite stance. Many of these new media sources are out there on the right, and none exemplifies their wrong-headedness better than The Conservative Woman. 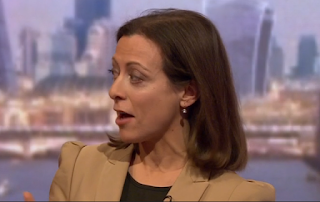 Laura Perrins is momentarily startled by the intrusion of reality

This site attracts many like-minded visitors, possibly because it is constantly plugged by the perpetually thirsty Paul Staines and his rabble at the Guido Fawkes blog. Sadly, the wider media world is not so enamoured of its co-editor, the droning and tedious not very good former lawyer Laura Perrins, who has not been asked back by The Andy Marr Show (tm), with her second Question Time appearance possibly being her last.

To make up for her less than engaging personality, Ms Perrins has hit on the wizard wheeze of desperately trying to be contrarian in order to attract more clicks. Sadly, the even more tedious Brendan O’Neill has already cornered this market. But she is not downhearted, and today has brought forth “The rape culture created by the Left”.

This piece holds, roughly, that Harvey Weinstein being rumbled for decades of inappropriate behaviour towards woman means there is a rape culture, and that it was somehow created by the mythical “Left”. Along the way, we are told “The Mayor of London is going to ban advertisements of women in bikinis on the Tube”. No, me neither.

Ms Perrins tells that “the feminists” (whomsoever they be) have only one principle: “as long as there is consent, you are good to go. The consent must be real, cannot be coerced or tricked, but consent is all you need … There is no morality other than consent and ‘health and safety’. Make sure the sexual intimacy is sterile and safe, then be on your way. You don’t even have to know his or her name”. What’s she on about? Who knows?

Then, after being informed that what she just invented is an “amoral nightmare” that’s part of “a hyper-sexualised culture that displays a fair amount of soft pornography” in which “We bring up kids”, she then claims that “we” (Who? Don’t ask) give said children rules which, conveniently, she also just made up. These include “One night stands are also awesome”, “Drunken consensual threesomes mean you are smashing the patriarchy”, and “Female modesty should be scorned and was only ever a means of controlling women”.

Anyone not completely lost? Don’t worry, not far to go. After all that comes the scolding, patronising and judgmental “So why all the harassment, ladies (if I may call you ladies)? Why the rape culture? If the Left has had the culture for the last 50 years, and all you have produced is rape culture and pornography, then what does that tell you?”

What “rape culture”? Someone in the USA misbehaved over a long period of time. Others may have done the same. That justifies neither “rape culture”, nor blaming “the left”. But Ms Perrins does want anyone not yet asleep to know that “we are awash, positively swimming, in pornography. The abortion rate is off the scale”. What scale would that be?

Jeffrey Barnard may be long gone. But we need not worry, because now we have Laura Perrins, who is also unwell. Sadly, she is also mind-numbingly boring, too.
Posted by Tim Fenton at 15:46

She might be swimming in pornography, but that's only because she wants to be. The rest of us know our limits.

Mind you, there was no rape or child abuse until the left started talking about it. So they - we - must have caused it. Obvious.

Oh for the good old days when people like Laura Perrins had only one outlet and that was an appointment in Harley Street. Cue: The John Barry theme to "The Human Jungle".

The odious Sarah Vine has just been on 5 live and was owned by Naomi Wolf who relived her days of being abused.

You knew she was owned when she called Naomi ‘my dear’. Odious woman who 5 live had the audacity to say was a journalist. Gob on a stick would more appropriate.

I agree- what on Earth is she trying to say?

She's just used a load of non-sequitor sentences, and thinks she has made a point when none has been made.

Who does she think she is, to think we're that stupid? You're not tricking anyone, Laura.