The name of Allison Pearson is not one that has come up on the Zelo Street radar often: the last time was when she was writing knocking copy to sneer at Mil The Younger following his encounter with Myleene Klass. But it is a name that may well go down in infamy after a clumsy Labour-bashing smear piece appeared in today’s Telegraph, titled “The price that Ed Miliband is prepared to pay to win the Muslim vote”. 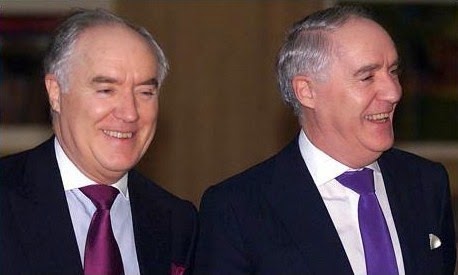 And what price would that be? “The Labour leader's pledge to redefine Islamophobia as an aggravated crime will be cheered by child sex-grooming gangs in Rotherham and election-stealers in Tower Hamlets”. There is the smear in a nutshell. Yes, Labour being against hate crime, which - as Ms Pearson is not telling readers - means any hate crime, not just Islamophobia - means electoral malpractice and paedos!

But, as Captain Blackadder might have observed, there was only one thing wrong with this idea - it was bollocks. When Ms Pearson tells “the main reason local authorities, police and social services did nothing to protect thousands of young girls from abuse at the hands of mainly Pakistani men was because they were afraid of appearing racist”, she is talking about people making accusations of Islamophobia.

What Miliband means when he says “We are going to make sure it is marked on people’s records, with the police to make sure they root out Islamophobia as a hate crime” is rather obviously about those who have a proven record (the word “record” is a teensy clue) of such behaviour. The Tel’s columnist fares no better when she tries to discuss goings-on in the London Borough of Tower Hamlets.

“Anyone who dared to challenge the Mayor’s shocking behaviour was branded - wait for it - Islamophobic” she asserts, once again missing the point, that what Lutfur Rahman or any of his pals claim does not give someone a criminal record. Nor does she garner any credibility points by citing Andrew “transcription error” Gilligan, whose main charge against Rahman - Islamic extremism - was dismissed by the recent ruling.

But she does know that “If Ed Miliband’s new hard line on Islamophobia becomes law, men like Rahman could thrive unchallenged and our country will be even less able to defend itself against practices and customs that we find utterly abhorrent”. So she doesn’t know very much at all, as witness “if Ed Miliband has anything to do with it, I too will have my name recorded by the police”. Only for crimes against journalism, mind.

Hate crime - including that committed on religious grounds - is A Bad Thing. But for it to be taken into account, someone has to get guilty. Allison Pearson, I suspect, knows this full well. Instead, voluntarily or otherwise, she has churned out a desperate and dishonest smear in order to suggest that the Labour leader intends to give succour to child abusers. And all that this shows is that the Tel has fallen yet further from grace.

The sick desperation of the right-wing press has ceased to carry any shock value.
Posted by Tim Fenton at 17:25

Also worth pointing out (as I have to again and again online, this nonsense having been circulating for over a week) that this has also been pledged by the Tories:

Every police force in England and Wales will be required to record anti-Muslim hate crimes and treat them as seriously as anti-Semitic attacks if the Tories win the next General Election, Theresa May has announced.

In a move hailed by Islamic groups, Mrs May said that police will have to record Islamophobic attacks as a separate category, just as anti-Semitic crimes are recorded separately.

At present some forces, including London’s Metropolitan Police, do record Islamophobic crimes as such. Other forces categorise them as hate crimes or specific offences such as assault or grievous bodily harm.