Those mentioning the serial unpleasantness of career motormouth Katie Hopkins are invariably given one standard reply: don’t even mention her, because it will only encourage her. If only she were ignored, all would be well. Sadly, her latest outburst shows that there can be limits to ignoring her: an incitement to racial hatred should not go unchallenged. And not when it revels in seeing others dead. 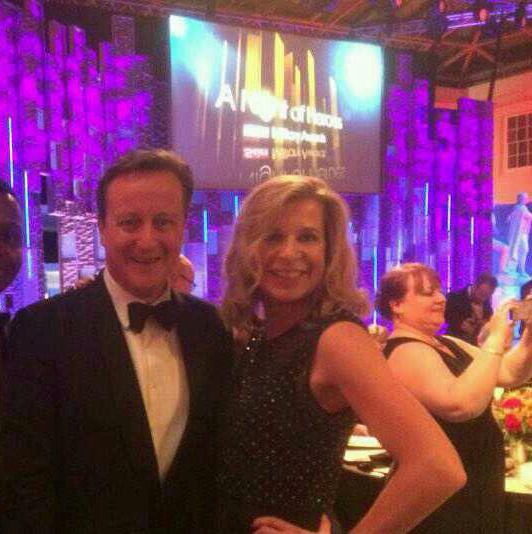 Happy with your new pal, Dave?

Under the headline “Rescue boats? I’d use gunships to stop migrants”, Ms Hopkins has been allowed by the Sun (hello, Stig Abell) to assert “NO. I don’t care. Show me pictures of coffins, show me bodies floating in the water, play violins and show me skinny people looking sad … I still don’t care … Because in the next minute you’ll show me pictures of aggressive young men at Calais, spreading like norovirus on a cruise ship”. 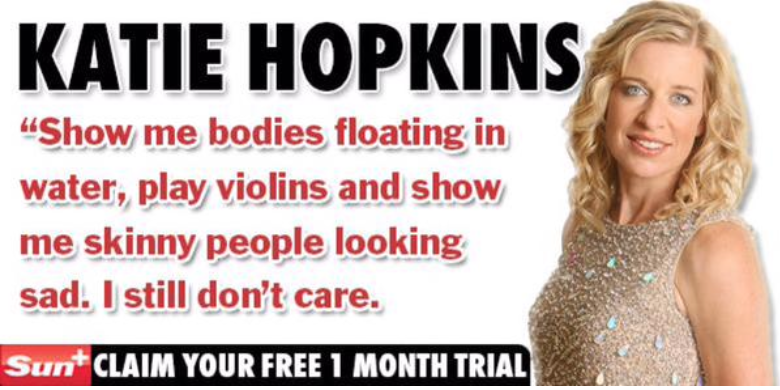 It gets worse: “do I feel pity? Only for the British drivers, who get hit with a fine every time one of this plague of feral humans ends up in their truck”. Then she begins to lose it: “these two populations are the same. The migrants harassing Brit truckers at the ports are the same as the vagrants making the perilous trip across the Med”. 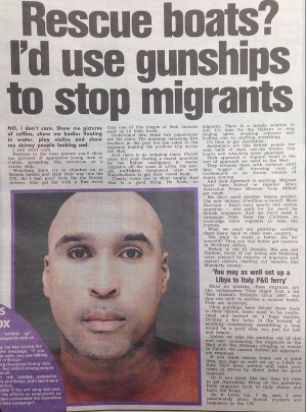 Leaving aside for a moment the idea that those who have trekked thousands of miles to flee conflict across the Middle East and the Horn of Africa and have secured enough money to pay the people smugglers to get on to a boat heading for Italy are not vagrants, but people - that’s as in human beings, Katie - who have not fetched up at a port in Libya as some kind of lifestyle choice. So what is her solution? 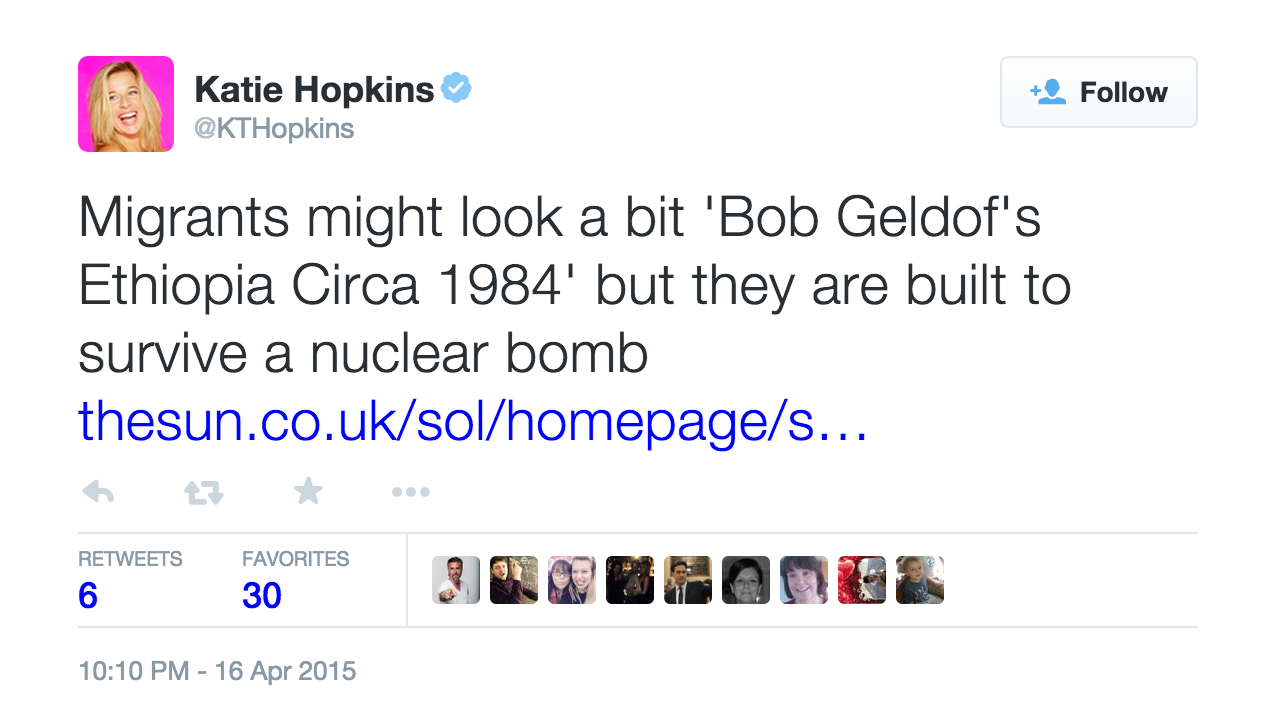 She wants us to “get Australian”, and “threaten them with violence until they bugger off”. She goes on (unfortunately) “Once gunships have driven them back to their shores, boats need to be confiscated and burned on a huge bonfire. Drilling a few holes in the bottom of anything suspiciously resembling a boat would be a good idea, too”. 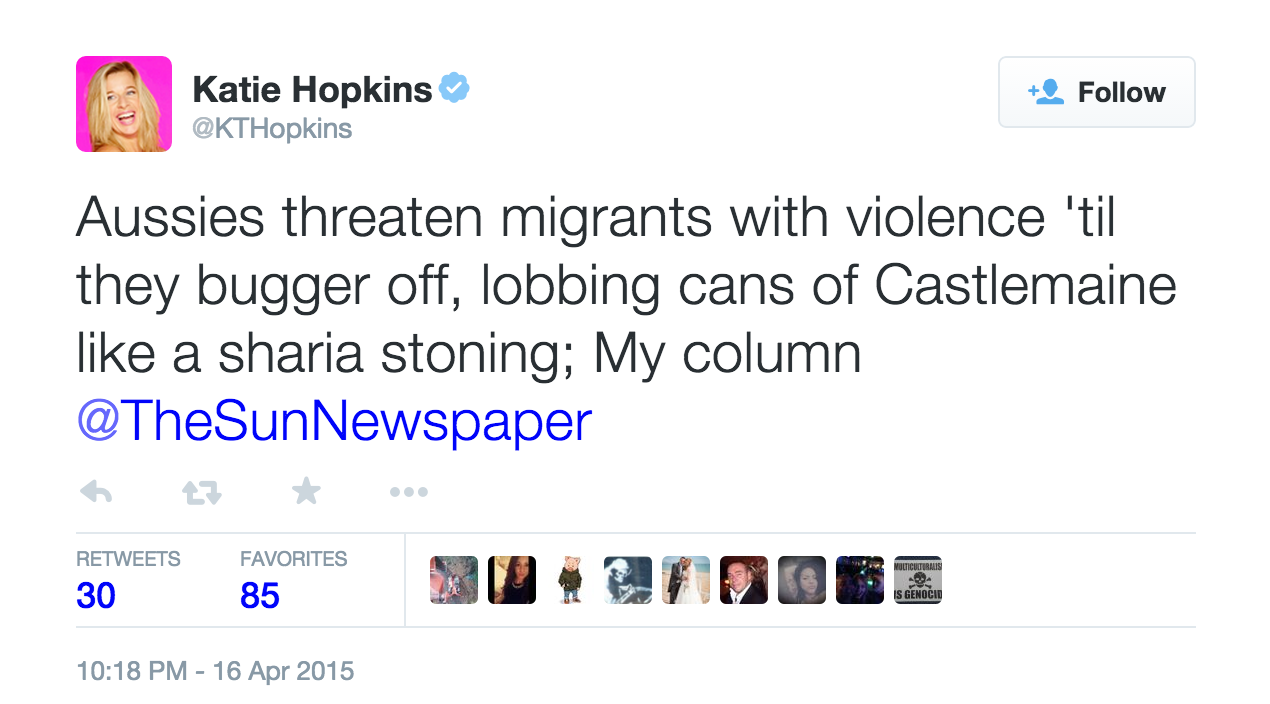 She’s not finished with the racism, either: “Some of our towns are festering sores, plagued by swarms of migrants and asylum seekers, shelling out benefits like Monopoly money … Make no mistake, these migrants are like cockroaches”. And, as Jon Stewart might have said, two things here.

Alex Andreou has asked the obvious question: “Can @metpoliceuk explain why this by @KTHopkins is not "racial hatred" caught by POA1986, PtIII? @TheSunNewspaper”. Perhaps Stig Abell, the paper’s managing editor, would care to respond. After all, he did take to Twitter the other evening to reproach Mil The Younger with “Miliband using Syria to embellish his self-image is pretty ugly”. His pundit just did rather more than that.

Instead, Abell is happy to give Ms Hopkins a well- remunerated berth, to jovially refer to her as “Satan’s Mother-In-Law”, and pretend she’s just “told it like it is”, rather than use his paper as a platform to stir race hatred and incitement. That is the real problem: those who encourage Katie Hopkins the most are the Murdoch press.

Abell is presiding over an operation that has effectively said this kind of thing is OK, nothing more than free speech. Well, it isn’t, and it isn’t. This Wild West show of ignorance, bigotry and inhumanity has more than run its course. It’s time it stopped.
Posted by Tim Fenton at 10:31

I find it very odd that CCHQ hasn't had a word in Murdoch's ear about this sort of thing. The paper that will do anything in its power to get Cameron elected is happy to print the thoughts of this wretched woman alongside its political views. To me it screams "Katie Hopkins values = our values" and apparently that's fine by them.

It might be worth a request to the Stig Abell, Dunn, Sharpe, Murdoch & Co to ask what they would not print in their comic?

Anything other than political right wing views?

I would guess it's their equivalent of Fox News which probably wouldn't get past Ofcom if it broadcast over here.

As for migrants, how far back does she go?

"Hopkins Family History. English: patronymic from Hopkin. The surname is widespread throughout southern and central England, but is at its most common in South Wales.Irish (County Longford and western Ireland): Anglicized form of Gaelic Mac Oibicín, itself a Gaelicized form of an Anglo-Norman name."

Gun boats in the Irish Sea?

Worth noting: 'Cockroaches' isa *very* charged word when writing about Africa and death: it was the term used by the perpetrators and incites of the Rwandan genocide.

As I said in response to a previous post re the is woman - a psychiatrist would have a field day with her.

As for the Sun printing this vile stuff - words fail me.

"As for the Sun printing this vile stuff - words fail me"

The man wot Dunn it explains in a tweet that she is just a columnist.
So any celeb's views are valid and worth paying for in The Sun?

Next up Hugh Grant? Sorry too vile!
Beyond parody.

I find it hard to comprehend her absolute lack of empathy, whatever her views on migration, towards people fleeing terrors and deprivation of which she is wilfully oblivious. Of course, come Ed's increasingly likely move to No.10, she has promised to leave the country becoming a migrant herself. The sooner she moves to her natural habitat, the Faux News bunker, the better.
And why hasnt she had a visit from the police yet? I've read far milder diatribes from people, not friends of Cameron like her of course, who have had the knock on the door and worse.

I wonder whether we're wrong to hate Katie Hopkins, and whether we should instead pity her. Would that hurt her more than the hate fuels her?

I couldn't agree with her more and think she should stand as priminister.