The polls are still showing the two largest parties deadlocked. Every attempt to shift the numbers, even by the Tories, who, let us not forget, are backed by the majority of the press, does not appear to be making one bit of difference. So today The Blue Team has reached for its latest secret weapon, and has deployed “Shagger” Major, who at least has the distinction of being the last in his party to win a General Election. 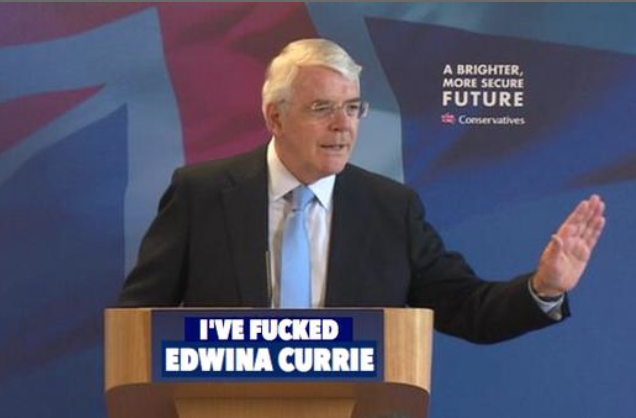 As re-envisioned by Doc Hackenbush

You read that right: Young Dave came up short of the win line in 2010; Major’s win in 1992 is therefore the last enjoyed by the Tories. So out he comes, for one last gallant innings. “Ed Miliband would be left vulnerable to a ‘daily dose of political blackmail’ by the SNP if the Labour party forms a post-election alliance with the Scottish nationalists” is typical of the attack lines. And he’s four square behind Cameron.

“At the very moment our country needs a strong and stable government, we risk a weak and unstable one – pushed to the left by its allies, and open to a daily dose of political blackmail …In 16 days’ time, the people of the United Kingdom will elect our next government. There is a simple choice to make: do you vote for the party that presided over economic chaos: or the party that has led us out of it?” he is telling.

So “Shagger” wants us to know that those SNP people are a not inconsiderable threat - oh yes. But here a thought enters: when it comes to being subjected to “a daily dose of political blackmail”, Major is the last person to wheel out. In that 1992 contest, the Tories’ majority had been reduced from the 102 gained by Mrs T in 1987 to just 22. And, before long, the hapless “Shagger” started losing by-elections. 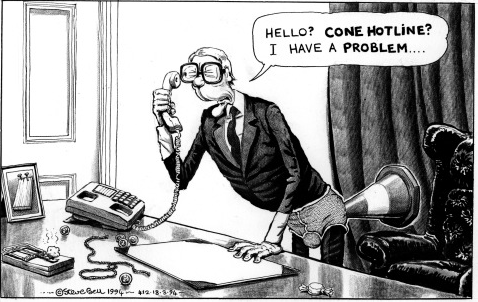 As this process unfolded, Major had to look to the Ulster Unionists to help prop him up, rather as, er, he is suggesting that Mil The Younger would do with the SNP. That leaves him in an extremely draughty glasshouse. But it gets worse: alongside the dwindling majority went two other strands that defined the Major Government. One of these was his continual problems with the Europhobic right of the Tory Party.

There was even a leadership challenge - Major, apparently fed up with the back-bench rumblings, precipitated it himself - where John “live long and prosper” Redwood stood against him. And then there was the S-word: sleaze. Ah, the sleaze of the Major years, the unending procession of chancers and shaggers that began with David Mellor and concluded with Neil Hamilton and his brown envelopes.

On top of that were the seemingly pointless initiatives, typified by the Cones Hotline, which served only to allow the Guardian’s Steve Bell to further ridicule the increasingly beleaguered Major. Yes, John Major knows all about weak Prime Ministers propped up by smaller parties representing only a part of the United Kingdom - because he was the best recent example. If Cameron is banking on him, then he really is desperate.

A weak PM buffeted by extremists? That was Major. And don’t forget his rattling hot Currie.
Posted by Tim Fenton at 13:35

And the only reason we got rail privatisation, which has been such a success, was that the Ulster Unionists voted for it on the condition that Northern Ireland Railways remained in the state sector (where it remains)

I think the Ulster Unionists got rather more than that, NIR wasn't worth worrying about!

CCHQ to Major John
Commencing countdown, elections on
Check with Dacre and may Rupe's braves be with you

Though I feel like I've passed the point of no return
I'm feeling very ill
And my audience knows which way the wind does blow
I think I should go home, watch the green grass grow

The main effect of Major's intervention seems to be the reintroduction of the word 'bastards' in connection with right-wing, anti-EU Tory MPs!