The Daily Mail was laughed out of the court of social media yesterday over Andrew Pierce’s mirth-inducing attempt to reinvent Mil The Younger as some kind of Flashman-like serial womaniser, only to end up demolishing the paper’s own stereotypes of the Labour leader as weak, weird and useless by conceding that he dated several highly intelligent, smart, attractive and independent women. So did the Dacre doggies learn that lesson? 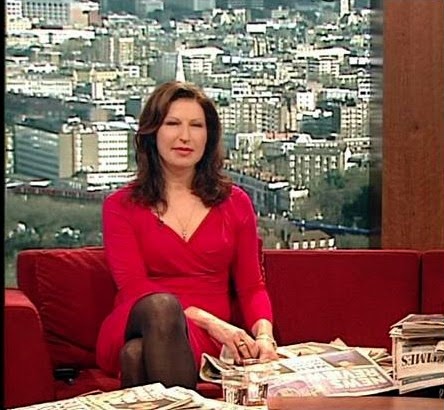 Sadly for the Vagina Monologue and his fellow inmates in the Northcliffe House bunker, not only did the lesson remain unlearned, but the subject had to be revisited, by Glenda Emeritus Amanda Platell, who has today told readers “Ed’s past proves he can’t be trusted”. This is delivered with confidence and precision. Unfortunately, it also depends on telling a blatant lie about Miliband’s first meeting with wife Justine.

Here’s how the original Mirror article gave Justine’s account: “I first met Ed when I went to a friend’s house for dinner … I was interested in him, I thought he was good looking and clever and seemed to be unattached. But we just went down a conversational cul-de-sac … Apparently we had nothing in common. He wanted to talk about economics – one of my least favourite subjects … Then I found out he was secretly going out with the woman who had invited us [she wasn’t alone?] for dinner. I was furious”.

So let’s get this straight: he didn’t tell her he was single - she assumed it. Keep that in mind as we see Ms Platell slip in the whopper: “revelations, aired by his wife, Justine, in a gushing newspaper interview, that he had misled her into thinking he was a single man when they first met, though he was already dating another woman”. See it? “Misled her”. Her assumption becomes his dastardly deed!

It gets worse: the Platell piece recycles her own lie with “the delightful Justine let slip that her husband is the sort of man who would dissemble and deceive a young woman at a dinner party, hedging his bets in the hope of personal advantage”. Is this an accident? Did Ms Platell not read the Mirror interview? She probably did, which makes it worse.

And making it worse still is this further slice of dishonesty: “Ed did stab his brother in the back to become Labour leader, causing unimaginable distress not just to his sibling but to his elderly mother”. Back to the Mirror interview, which talks of Justine on the phone, “speaking to Ed’s mum Marion who is at the doctor’s with their younger son – four-year-old Samuel – who has a high temperature”. Maybe not that much distress, then.

There is a third thing Ms Platell misses from the Mirror article, too: Justine did not go to that dinner party alone, as she tells “He [Ed] didn’t know my friend Adrian”. She went with another bloke! What the heck, ignore that, it complicates the smear. Then, having penned this pack of lies, Amanda Platell will, if invited, fetch up on tomorrow’s Andy Marr Show (tm) and smile like butter wouldn’t melt in her mouth.

Being Amanda Platell means never having to say you’re sorry. Or even care.
Posted by Tim Fenton at 17:25

Pretty sure Ed has also given interviews where he mentions that when he and JM first met, it was at a party and 'we were both seeing other people at the the time', too...
So clearly, Justine M's comment was a wry comment about disappointment, and not actualy "fury" as the rw papers would have you believe.

What I don't understand is the shock and horror of the Daily Mail at such a story - are they seriously saying that nobody in the world has ever met their future partner from a group of people in a similar social circle? Or that people in relationships don't talk to other people and meet again later? It seems like a patronising attempt to tell women voters how to feel, to be honest. I got the same impression from the Andrew Pierce piece - his assumption that all women would be horrified by this rather than mildly amused and bored was ridiculous.

(Did you see the Telegraph front page, by the way? Some clever placement - the page 1 paragraph uses odd phrasing to mislead one into assuming that Ed had an affair with Stephanie Flanders to the fury of his then-wife, and it's only once you turn the page that you get the detail, which is that he stopped seeing Flanders in 2004, and didn't date his wife till 2005, a year later. Easy for skimreaders to get the wrong impression. I don't suppose they'd be too unhappy if that were to happen...)

Just like normal plebians
We're outside looking in
But if you really had to read the Mail
Where at first should you begin
Try Amanda, try her

She's Dacre's pet attack dog
She goes in, no reserve
Tough on those who opposed her own boss
Who helped those blighters Hacked Off
Must get what they deserve

So she writes stuff, makes up stuff
She plays it like a game
But we know it's really all huffn'puff
To her own eternal shame
So take us away
From her, Amanda, takes us away