Rebekah Returns To Murdoch’s Side

There is much talk in the right-leaning press that their world has changed since the Leveson Inquiry and its subsequent report, that the bad behaviour has been finally put aside, the use of “The Dark Arts” to pursue stories is no more, telling anyone who complains to make do with what their stooge “regulator” concludes and otherwise to sue if they think they’re hard enough has had its day, and that all is now sweetness and light. 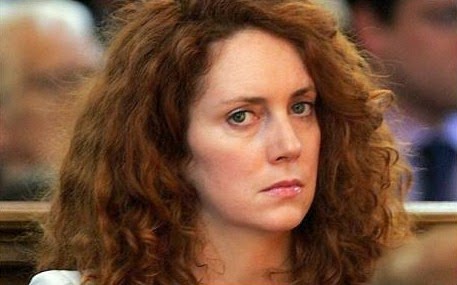 No, I'm not looking at you, thanks

There was, as Captain Blackadder might have observed, only one thing wrong with this idea - it was bollocks. And nothing exposes the charade that the larger part of the Fourth Estate has learnt anything from the Phone Hacking scandal, the exposure of the now-defunct Screws as little short of a criminal enterprise, and the subsequent trials, than the reappearance on the scene of Rebekah Brooks.

Ms Brooks embodies the very worst behaviour of the right-wing press in general, and the Murdoch empire in particular: schmoozing her way around the rich and powerful while bullying and belittling her staff, networking with her chosen politicians while putting the boot in to those who had, for whatever reason, incurred her or Creepy Uncle Rupe’s displeasure, and all the time pretending to exude sweetness and innocence.

It was Ms Brooks who, along with Murdoch Junior, barged in on, and then berated, then editor of the Independent Simon Kelner for the ostensibly innocuous use of the paper’s front page to tell readers in the run-up to the 2010 General Election that “Rupert Murdoch won’t decide this election. You will”. As Kelner has since told, the behaviour of this pair “came straight out of the ‘Mafioso for Beginners’ handbook”.

And it was the call from Mil The Younger that she should go that confirmed the Murdoch press’ hostility to him: Rebekah was untouchable, she was special, she was Murdoch’s personal favourite. The luckless Andy Coulson could be thrown to the wolves - and was - but they were not entitled to roast Rebekah. That was way beyond the pay grade of anyone of lesser rank than the man at the top.

And so it has come to pass: despite her being handed a pay-off north of £10 million - just to tide her over, you understand - Ms Brooks has not merely returned to the Murdoch empire, she is also slated for a job back at the Sun. Like Kelvin McFilth before her, those embarrassing past episodes are no barrier to the head Mafioso’s patronage. One can only marvel at the apparent hold she has on the old man.

According to the excellent Exaro News, Ms Brooks “is being lined up to take charge of the [Sun’s] digital operation and its video offering … Sun insiders believe that the role would pave the way for a more senior job later”. And there, in a nutshell, folks, is proof - if proof were needed - that the right-leaning press has learned precisely nothing from hacking, Leveson, or anything else, and they believe they can carry on exactly as before.

Well, have I got news for them: they can’t. Dinosaurs are long extinct. Think about that.
Posted by Tim Fenton at 13:07

Let's not forget either she castigated married people for having affairs - whilst doing exactly that with Andy Coulson.

"beleive they can carry on exactly as before"
Trouble is, who's going to stop them, cant see Labour doing anything.

May be she is returning to track down all those pesky digital devices that suddenly disappeared.

They could call it Op Redhot Hawk.

"Broadsword calling Rupert. Apples and Blackberry pies delivered and the old boiler is back in the pot."

This is very bad news indeed, though I would not say I did not see this coming. It looks like she tried to work in the U.S. & likely was refused a Green Card from US immigration. At least I hope so! They wouldn't be that daft to let her in.

As for her reincarnation at News UK, I blame Hacked Off. They made several misjudgments, negotiating mistakes and refused to listen to people like me. Their hubris was not dissimilar to that of the tabloid press they despise. Leveson now appears to be a huge waste of public money and time. Hacked Off needs new leadership pronto!