Despite all the denials, the most open secret in and around the Tory Party is that, should Young Dave not prevail in next month’s General Election and decide to stand down as leader, at the front of the queue to replace him would be London’s increasingly occasional Mayor Alexander Boris de Pfeffel Johnson. Those who have observed Bozza in action (or perhaps that should read “Bozza Inaction”) know he is not up to it. 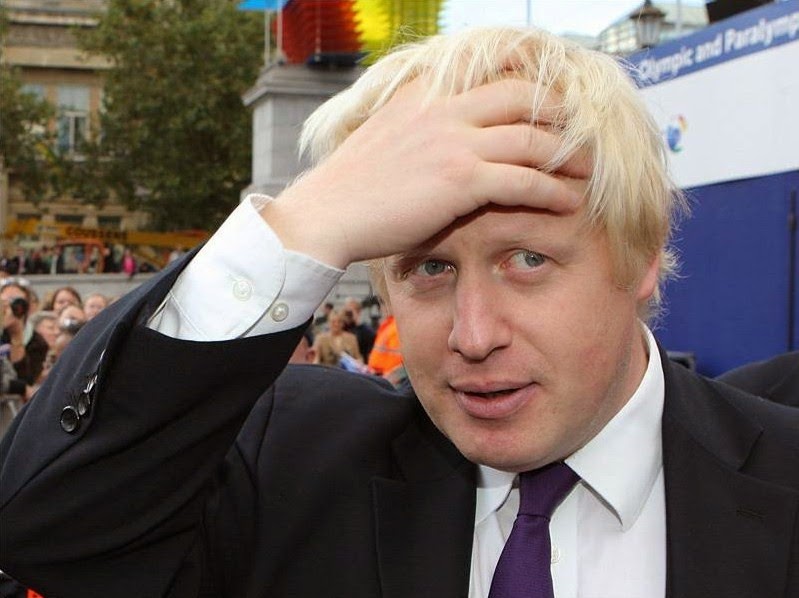 One should not drive this one round the houses: Johnson was an appallingly bad MP, he suffered the ignominy of being sacked from the Shadow Cabinet not for his affair with Petronella Wyatt, but because he lied about it, and his tenure at City Hall has been marked by claiming credit for much of what Ken Livingstone started, blustering his way through MQT, and roundly abusing critics, often using mental health smears to do so.

Otherwise, Mayor Bozza has sprayed money up the wall on the vanity cable car, vanity buses - which still bake their upper deck passengers whenever the weather warms up - and a badly executed cycle hire scheme. He is now trying to spray more public funds up the wall on the “Garden Bridge”. His sole achievement is getting approval for Crossrail, without which all those business leaders would not have backed him in 2012.


But he’s still got his eyes on the prize of the Tory leadership. So to this end, measured and loyal Bozza fetched up this morning on The Andy Marr Show (tm) to trot out the usual jolly good fun act. All appeared to go well. But then, at the very last, he was sat down on the sofa alongside Mil The Younger. And from that point, his campaign progressed not necessarily to his advantage. This is important.

Because if Dave does go, it will most likely be because Miliband has become Prime Minister. This was Bozza’s opportunity to show just how spiffingly wonderful he would be at PMQs. Off he went, bashing Labour on their Non Dom policy. Miliband calmly asked him if he was in favour of “state sponsored tax avoidance”. Bozza became agitated. He cited “Auguste” Balls twice. He accused Marr of giving Miliband an easy ride.

Then he lost it. “Hang on, is this the Ed Miliband who was in the Treasury … with Gordon Brown? Are you the same creature?” His opponent was unruffled. Another tack was tried: “Not only did we go to the same University, we went to the same primary school” blustered Bozza, to which, er, so intercoursing what? In any case, Miliband was waiting with the put-down: “Not the same secondary school, Boris”.

So Bozza had a go at Marr: “Neither of us went to a school as smart as Loretto” (and again I say, so intercoursing what). And before he could reply to Marr’s point about his “backstabber” remark, Miliband told him Lynton Crosby was putting him up to saying that, and that he should dispose of his services if he becomes Tory Leader. By this time, Tories up and down the country were realising how PMQs would play out with Bozza.

Faced with around 300 Labour MPs ridiculing him, he’d be toast. Every week. So who wants him as Tory leader - apart from Miliband? Don’t all shout at once.
Posted by Tim Fenton at 13:03

Were BoJo a serious candidate, he has to impress the Tory backbenchers, not the paymasters — for Tory MPs winnow down the nominations to just two, which then go out to the constituencies.

That means, from Day One, BoJo has to be on his hind legs, prated on any subject going. If I read Speaker Bercow aright, he'll be only too happy to let BoJo make a fool of himself. Even PMQs won't wash: a confident, well-briefed Miliband against the Islington buffoon.

As you say, BoJo has never featured as a strong performer in the Commons.

Boris was terrible - all style and no substance. He thought he just had to rock up and throw out a few classical references to impress the plebs.
Major fail!!

Hahahha. Boris, what a character.

Boris hasn't the patience to spend 5 years in opposition.
Cameron in Yeovil today, where the largest employer by far is Finnmechanica's AgustaWestland. Agusta Westland isn't doing too well as the UK government isn't suporting it very well, so it relies on getting work from Italy. At 1.4 Euros/£ that's costing them a lot.
There is a comparatively large UKIP group in Yeovil, but most Yeovilians can see that they rely on being members of the Eu to avoid becoming a ghost town.

I thought Ed's bringing in Lynton Crosbie and suggesting that Boris sack him if he became LOTO was a superb piece of politics.

The Tories are, I suspect, with a campaign going nowhere at the moment, in the midst of an internal crisis. This is Crosbie's campaign and a lot of blame must be flying his way - and Dave's, for appointing him.

So Dave's nemesis Boris is publicly advised, with an understanding smile from Ed, to dump Crosbie, thus opening a further divide between Dave and Boris.

In this Machiavellian knifing I thought I almost detected the hand of Mandelson. I saw him recently on Channel 4 eating humble pie and saying how much he now admired Ed. Has he been let back into the campaign?

You have such an insightful blog. Thanks for sharing. Reading blogs, especially self-help and leadership blogs, is my hobby and I randomly found your blog and we both share common interest. Connect with me, if you like, and let us explore our common interest. I enjoyed reading your posts. Interesting! All the best for your future blogging journey.

Boris couldnt even be bothered to turn up at the first hustings in the constituency (next door to mine) last night, apparently. All the other 12 candidates were there. Contempt for the voters verging on the Galloway scale. Too busy sticking the knife in Cameron's back elsewhere obviously.

But but.. Quentin Letts says that Boris savaged him