Paranoia strikes deep
Into your life it will creep
It starts when you're always afraid
Step out of line, the men come and take you away 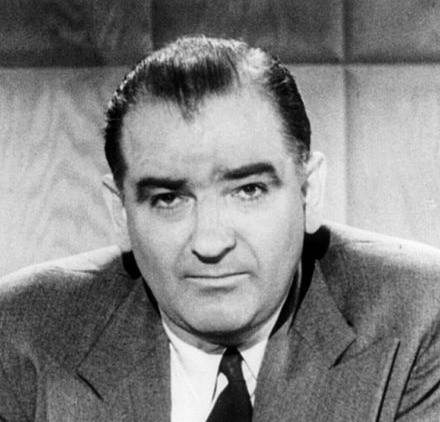 The brief and bizarre era of Joseph McCarthy, Senator from the state of Wisconsin, was the time of the “Red Scare”, of paranoia regarding how many Communists were in the US Federal Government, any other Government, Hollywood (a conceit that still persists in those at Fox News Channel (fair and balanced my arse)), business, the armed forces, and, of course, under the bed. Any bed, anywhere in the USA.

McCarthy left this world 58 years ago, but his spirit has returned to guide the perpetually thirsty Paul Staines and his rabble at the Guido Fawkes blog, as witness today’s frankly barking post “Red In The Fed: Housing Critic Is Paid-Up Labour Member”. The National Housing Federation (NHF) has criticised the Tories’ right to buy proposals. Ruth Davidson, their Director of Policy and External Affairs, has appeared before the media.

The post, penned by Staines’ tame gofer, the odious flannelled fool Henry Cole, reveals that Ms Davidson is a member of the Labour Party, which makes approximately Sweet Jack difference, as the criticism is not hers alone. But then Cole loses it big time as the, er, red mist descends. “It is on days like this that the hidden red sleepers in the third sector come to the surface” he froths uncontrollably.

Really? Do go on: “Organisations like Shelter are stuffed to the gills with former Labour apparatchiks, sitting out opposition in the comfort of quangos and charities”. The NHF is neither a quango, nor a charity, and nor can it be classed as “third sector”, being a limited company. But Cole’s fear is undimmed: the last Labour Government “stuffed these supposedly neutral groups with sympathetic lefties”. No citation is given.

And then Wibble Overdrive is engaged, as he rants “This Gramsci inspired march through the institutions was one of the more pernicious elements of the Labour years. Should Miliband get the keys to No 10, he would unleash a new wave of this patronage. You thought Brown was a leftie? Just think who a Miliband administration would court, promote, and place”. Perhaps Sir would care to have a lie down in a darkened room.

If Master Cole has evidence that the last Labour Government “stuffed these supposedly neutral groups with sympathetic lefties”, or any other of the accusations he levels, he should bring it forward, but he will not, because he and his pals do not have any (employing Labour members, Fawkes folks, does not count). Otherwise, he is doing nothing more than making himself look an even greater figure of ridicule.

And he should not lose sight of what happened to the late Senator from Wisconsin: Joe McCarthy was brought down mainly by his fondness for drink. One does not need to draw parallels: the Fawkes rabble are keen to parade their overindulgence in the area. Another fine mess, once again.
Posted by Tim Fenton at 17:31

Back in the Thatcher years, when Quangos were stuffed with the wives of ministers, there were accusations of leftyness even then.

TBH, to paraphrase Pratchett and Gaiman, the current right frothing about the 'red menace' is like someone at the north pole saying that all southerners are bastards.

For someone like this Coles bloke (and what a piece of work he is, eh?), I get the distinct impression its not that organisations such as Shelter are 'stuffed' full of lefties, it's the loathing of the very idea of Shelter. Like the Tea Party in the US, for Coles the answer is easy: poor? No job? Mental illness? No where to live? Then you should be left to die.

Mr Cole proving that Empty vessels really do make the most noise.

Thank you, that made me laugh very much, particularly "he froths uncontrollably." Spot on.

Think it's time we stop, guys, hear that sound
Everybody hear what that clown's putting down

He's making a list, he's checking for reds
He's gonna find out whose under his bed
Harry Cole is coming to town

Think it's time we stop, guys, when you hear that sound
Everybody just forget what that clown's putting down

Murdoch does like to surround himself woth weak-minded people! Makes it easier to manipulate them. Look at Cameron for instance... Pinnochio in every sense!