It’s not often that you see a story reported by the Express that is not picked up – or that has already been run – by papers outside the empire of Richard “Dirty” Desmond. But yesterday, there it was – an exclusive, no less, on the subject of the National Lottery. Was the institution that raises all that money for good causes up for grabs? You might have thought so. But it isn’t. 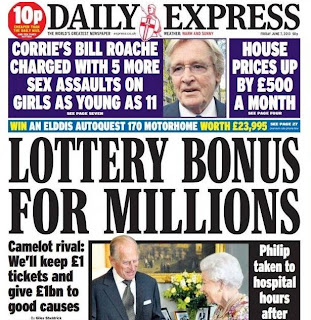 “Richard Desmond pledges to make the National Lottery 'bigger, better and British'” trumpeted the headline. Ho yus? Des had “today promised to turn the ailing National Lottery into the ‘lottery for the nation’ if he was given the licence to run the operation” it went on. So when is the National Lottery licence up for grabs? Later this year? Next year? Well, no ... not until 2023, actually.

And Camelot, the incumbents, have only said that they “might” not bid at that time. But on ploughs the copy: “The Canadian-owned operator has been rocked by the success of Mr Desmond’s Health Lottery, which has raised nearly £35million for health-related good causes across the UK”. Ah yes, Des’ so-called “Health Lottery”. The one that was supposed to raise £50 million a year for good causes.

But the Desmond “Health Lottery” seems to be managing no more than half that, while the National Lottery manages £35 million for good causes each and every week (2012 figures). Des’ lottery gives just over 20p in the Pound, while Camelot’s gives 28p. And the Desmond lottery, according to one of its directors at the time, won’t be giving any more until Des gets his money back from it.

You read that correctly: Richard Desmond, far from being some benign philanthropist, is running his “Health Lottery” just as he would any other business: for the benefit of Himself Personally Now. Just as he runs his newspapers, in whose running he – despite protestations to the contrary – routinely interferes, and hence this ridiculous puff piece about something that isn’t going to happen.

And the “Health Lottery” hasn’t been without its critics, even beyond its giving rather less of total revenue to those good causes than the National Lottery. After Des’ offering had been branded a “disgrace”, the Gambling Commission looked into whether the whole thing was in fact legal: Des’ lottery operates as a combination of 51 supposedly individual lotteries (all under the same management).

No, what the Express front page lead highlights is the fall of a paper that 60 years ago was shifting four million copies a day – and was equally respected and feared for its investigative journalism – to the level where its “exclusives” are jumped-up advertorial dictated by an owner who claims not to interfere in the editorial process, while in reality doing exactly the opposite.

But Des trousers a profit, so that’ll be another Benchmark Of Excellence!
Posted by Tim Fenton at 11:09

I see that the comments section of the article is "unavailable" . I wonder why?

It's also front page of the Daily Star as well (prop. R Desmond)http://www.dailystar.co.uk/news/view/319010/Star-boss-Lottery-bid/

From their own figures £35m in donations at 20p per ticket = 175m sales in two years. Compare that to seven billion national lottery tickets per year. I'm sure the Lotto is "rocked" by these numbers.

I really have a problem with the Health Lottery. I smelt a rat once I checked the figures. Quite apart from the money given to good causes (28p vs 20p), there's also the issue of the prize fund. According to calculations, a maximum of 24p in the pound goes towards Health lottery prize money versus 50p for the national lottery.

That leaves 22p in the pound left over for Camelot versus 56p for the Healt Lottery. In practice, caemlot's profit is even smaller once operating costs, and the cut of retailers and the government is taken into account. But even disregarding this, that's two and half times more profit for the owners of the Health Lottery. In short, this winner of the health Lottery last week, this week, every week is Richard Desmond. Everyone else loses.

Then there's the question of just how good these good causes are. The list of good causes I've seen are a list of charities that all suspiciously start with the word "health". Unless it's a staggering coincidence, this looks like all the charities getting this money are set up by the Health Lottery. Now, obviously the Charities Commission will keep an eye on this, and some of it finds its way to real charitable spending, but can we really be sure they're not creaming off another cut in inflated administration costs? I'm not.

This is a very popular scam foisted on the public at the moment: a superficially good offering that exploits the sentiment that you can't trust the government, can you? They know perfectly well that the muggins who buy into this won't have checked the smallprint and work out they're giving their cash to a far bigger robdog.

Oh, and Tim in case you haven't already seen it, you might want to take a look at this:

In short, The Express has a history of borderline advertising masquerading as news. Only consolation is that if the Health Lottery ever was a serious contender for Camelot's franchise, the media would probably wise up and tear it to shreds.