London’s occasional Mayor Alexander Boris de Pfeffel Johnson is kept on his toes briefly of a weekend by the need to interrupt the otherwise agreeable preamble to his luncheon appointment to chuck together his latest column for the Maily Telegraph, for which he garners £5,000 a week of “chicken feed”. And this week’s concurs with the Tel’s editorial line on climate change, which is, roughly, that it’s all rubbish. 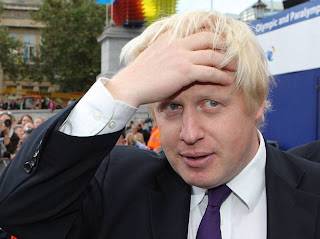 Cripes! Piffle! Codswallop! Can I have my money now?

And the first noticeable tic in Bozza’s stream-of-consciousness prose is that he refers to rectangles as oblongs. One can only conclude that the teaching staff at “school”, as old boys call Eton College, were either excessively lenient with young Johnson, he’s unlearnt what he was taught, or whichever of the Tel’s subs that gets the short straw and sorts his column had a problem translating it.

The “oblongs” in question are swimming pools: Bozza has noticed that some more upmarket residences have these out the back. One way he may have been reminded is that, when MP for Henley, one of the residences that had a pool was the one owned by Himself Personally Now. So why the sudden fascination? Is it because Bozza has fond memories of his time as a mere MP?

Well, no it isn’t. The swimming pool is nothing more than a device to enable Bozza to construct a strawman of epic proportions, as he rails against climate change (again). The rest of the strawman asserts that global warming has been sold as meaning summers would be like 1976 all the time, and that’s a strange one, given that there were four warm and mainly dry ones from 2003 to 2006.

Moreover, 1990 was at warmer at its peak than 1976, so why would Bozza quote the latter year? Ah well. This tells us something about the target audience: clearly, you have to be at least 50 to read the Telegraph. And you have to buy the schtick about someone, somewhere telling you that it would never snow again (hasn’t happened) and that swimming pools were sold on it getting “Mediterranean” (ditto).

Then Bozza makes the mistake of equating global temperatures with those at the location where he is bashing out his column. The key is in the word “global”: as I pointed out recently, while temperatures in London were below average, those in central and eastern Europe were well above. Now there has been a supposedly exceptional heatwave in Alaska. You have to average it out.

Meanwhile, Bozza correctly notes that aircraft chuck out air pollution. So does all other transport, and as Christian Wolmar has noted, this has caused the air quality in London’s Oxford Street, and around the North Circular Road, to fall to unacceptable standards. If the former isn’t going to get a tram running along it, then making it pedestrian only should be a priority. And that’s down to the Mayor.


Now, who’s the Mayor of London again? That would be you, Boris Johnson.
Posted by Tim Fenton at 17:11