TPA – Not In The Bag

Despite the efforts of the Desmond press, and possibly through the support of the Mail – the mid market paper that more people take seriously – the Welsh Assembly Government has taken action on the problem of free-issue plastic shopping bags, with a 5p levy on every one. Supermarkets have moved towards “bags for life”, and the amount of one-trip bags in circulation has dropped by around 90%. 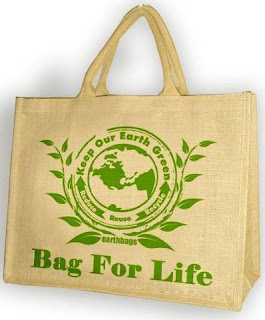 But this action has been taken by something called a Government, and for the assembled non-job holders of the so-called Taxpayers’ Alliance (TPA) this is by definition A Very Bad Thing. So their “Grassroots Coordinator” (the very definition of a “non job”) for Bath and South West England Tim Newark has ventured into the principality to find adversely on the ruling.

So what is the TPA’s excuse for what is, in reality, just another attempt to demonise Government? Newark sets out his objection to what he calls the “bag tax” at the outset: “not everyone is happy with it”. Rien de merde, Monsieur Holmes! Elected representatives pass a measure and there is less than 100% support from the electorate. Wow. Must be a first.

All that Newark can muster in the way of facts is that the Federation Of Small Businesses has registered “concern” about its members having to spend time accounting for the 5p charge. He also tells that “Bigger stores are also having to waste money and time recording the charges and accounting for how the proceeds of the bag tax are spent” but cannot cite one, as he’s just making it up.

But, Newark claims, “The environmental impact has also not been fully thought out”, which is a superb slice of brass neck, as neither he nor his TPA colleagues have done any environmental assessment, bar complaining about the “bag for life” concept, asserting that these will cause more damage when sent to landfill. This is utterly baseless, when a little thought is applied.

Supermarkets offering the “bag for life” also offer to swap them when they become worn out. This ensures that many of the bags don’t just go to landfill, but are recycled to produce yet more bags, and the amount of biodegradable material in the bags is, over time, increased. A “bag for life” is typically used scores of times, whereas a one-trip bag tends to be used, well, once.

Newark, though, is not deterred, and is planning a “day of action” against the “bag tax” on 19 May in Cardiff City Centre. On that day, he might find out that he is not part of some great crusading majority, but just a semi-professional whinger whose continual sniping at anything marked “Government” has run out of road (and he won’t be telling anyone about the wider TPA agenda, either).

So roll on a fortnight on Saturday. It couldn’t happen to a more deserving bloke.
Posted by Tim Fenton at 15:17

I may be wrong but I think all the revenue raised by this all goes to charity.