“Border Force chaos spreads to Eurotunnel’s Calais terminal” howled the not just aspirational but also much travelled David Millward in a Maily Telegraph piece posted today. Here, he tells how “Motorists hoping to cross the Channel are missing their shuttle services are having to wait up to an hour to clear British control posts”. They are? Wow. How bad are things, Dave? 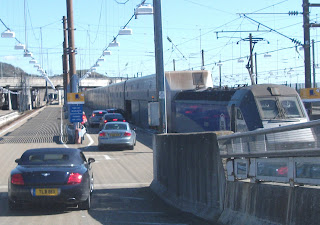 Boarding the Shuttle at the UK terminal. No, the Bentley is not mine

“At its worst the queues are backing up onto the French motorway network” he then tells, which must be bad: from the Autoroute divergence, it must be little short of a kilometre to the toll booths, and there are lots of them, spread out in line abreast. That would mean several hundred cars backed up, if not well north of a thousand. And at this point the bullshit detector goes off.

Each one of those Shuttle trains carries a lot of cars. But at the busiest of times, there are no more than four or five departures an hour, and I reckon a Shuttle carries about 200 cars top whack. So it would need rather more than an hour’s worth to be blocking back to the Autoroute. And I have a confession to make: I’m a semi-regular user of this service, and last returned from France on April 22.

Something the Telegraph can't hang their story on

On the morning of this day, I encountered no queue on the Autoroute, and none at the toll booth. The time at that booth can be seen on the window hanger reproduced here at 0949 local, and the letter M indicated the boarding sequence, which on that day meant the 1020 departure. Eurotunnel close up well beforehand, so if I was to make it, there could be no Customs foul-ups.

And there was very little in the way of delay, with most of the queuing at the first (French) border post, where passports were (unusually) being checked. Once through that one, the queue for the UK Border post was around half a dozen vehicles. I made the scheduled shuttle with relative ease: indeed, several more cars boarded after I did. And departure was, as usual, on time.

I don’t know where David Millward is getting his information, but on my experience that information is pretty poor. April 22 was at the end of the Easter holidays, and there would still be folk returning to the UK for start of the school term. But horrendous queues there were none. And I haven’t seen the traffic blocking back on any previous shuttle trip from France.

Perhaps the situation is different at other times of the year. But I used the service last August – the busiest time of the year – and the time taken to clear customs was much the same. I’m left with the impression that David Millward and the rest of the Telegraph hacks might not have checked this out and are just churning over second hand information.

That might interest the readers, but it’s not good enough.
Posted by Tim Fenton at 17:49

Big delays on the afternoon of April 4th, due entirely to a shortage of Border Force people. I was in the queue...