One proof that blokes are, like me, of A Certain Age is whether they bought The Kick Inside and Lionheart – on vinyl of course – when a young solo artist called Kate Bush burst on to the music scene at the end of the 70s. I plead guilty to still having both, filed away somewhere along with other long playing memorabilia. And Ms Bush was not merely another pop star: she was, well, different. 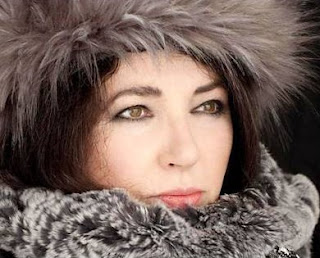 Kate Bush many, many years ago ...

And one thing that set her apart from the crowd was her iron determination to do things her way, to maintain total control over the music making, and ultimately to make that music whenever she wanted. So there were, on occasion, long gaps between new work as she started a family and spent more time being herself. But now Kate Bush has returned.

A new album called 50 Words For Snow has been released, and with it came a nomination for an Ivor Novello award, with P J Harvey and Adele completing an all-female shortlist. But Graeme Thomson, writing in the Guardian, doubted that Ms Bush would attend even if she won: “It’s been a full decade since she last made a scheduled public appearance” he warned. 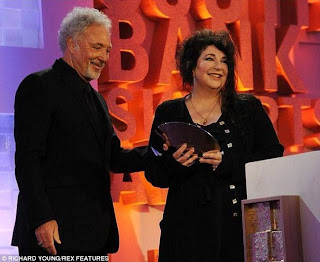 ... and collecting her award yesterday

Famous last words, though: yesterday Kate Bush came back, appearing in person to receive the Novello from Tom Jones. But what should have been a happy occasion, and celebration of a career spanning 35 years, was soured by the joint efforts of legendarily foul mouthed sorcerer Paul Dacre and his yet more unpleasant apprentice Martin Clarke, as the Mail laid into her appearance.

“When she took to the stage her russet-coloured locks were gone and in their place was a mane of dyed jet black hair, leaving fans hard-pressed to recognise her” told the eponymous Daily Mail Reporter, pausing only momentarily to remind readers that the singer was now “the 53-year old star”, and putting the boot in with zero subtlety by reporting that she was wearing “a baggy black dress”.

And the past image of Ms Bush could not be allowed to be let go, so there are three publicity shots of her from more than 30 years ago. This, though, has not impressed most of those moved to comment on the piece, who are generally more than happy to see her again, and not slow to remind the Mail that their hacks should not be surprised that people may look different over three decades on.

This time, the Mail has misjudged it badly, being sneering and judgmental when most of its readers – and anyone who cares about Kate Bush and her unique contribution to music – want to celebrate her achievement. Good for her.

Good for her indeed. For what it's worth, I think she still looks great and (most importantly) has infinitely more talent than all of those gobshites at the Mail put together.

D. C. Harrison wins this comment thread at the first attempt. Nothing to add to that!

The Mail have always had poisonous views about women in general.

Well said. Of course, it won't be the last time the Mail makes unneccessary, bitchy comments like this. And hopefully people as talented and wonderful as Kate Bush will continue to rise above it.

Completely agree with what you wrote but you should concede to the fact that DM were commenting on a really bad picture of her. I watched the video of the award and she's perfectly recognisable there. That said, Kate Bush also looks superb when she's done up for a photoshoot, just look at the first picture! That was taken only last year as promotional artwork for her latest album. And she has only attended the South Bank arts awards so far, although I do hope that she will turn up agqain at the Ivor Novellos in two weeks' time since her album was nominated for another one as well!

Many of the ludicrous and bitchy 'articles' about Kate in recent years have come from The Daily Mail...revealing (with 'helpful' photo) where her holiday home was located (so a few idiotic people calling themselves fans - they aren't - could spy on her; making up silly stories about her changing her name to Catherine Earnshaw are just 2 that come to mind. Do these vicious hacks not realise Kate is a person with feelings? Shame on them and their sad attempts at journalism. Kate is an extraordinarily talented and unique artiste. Perhaps they are just jealous.