Even with the speed at which the 24-hour news cycle operates, there is still a certain cachet attached to getting the attribute “Exclusive” on to your story, and for Rupe’s downmarket troops at the Super Soaraway Currant Bun, this is no exception, especially when it’s connected to a high profile case like the abduction of toddler Madeleine McCann. 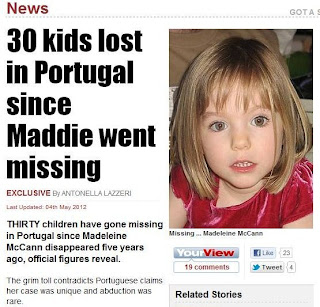 The Sun claims an exclusive ...

Thus it is today, with Antonella Lazzeri claiming that “Exclusive” tag for the piece “30 kids lost in Portugal since Maddie went missing”. And it’s backed up by “official figures”. The comment is made that “The grim toll contradicts Portuguese claims her case was unique and abduction was rare”. This looks pretty damning, until a little thought is applied.

No comparative figures are given for the UK – child disappearance is not unheard of in this country – and no context is given. Moreover, the story is short on just where those “official figures” came from, which is not so surprising, as the Sun piece is not really an exclusive, and the context makes the numbers look far less of a shock horror story than that painted. 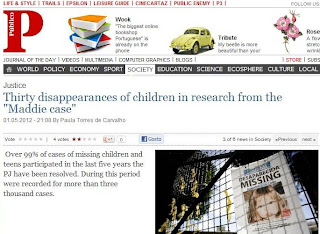 ... but this is where they lifted it from

The figures were published three days ago in the Público – here’s a screenshot of the story with the date clearly visible – and the context was that the Policia Judiciaria (PJ) have successfully resolved 99% of all child disappearance cases in the five years since Madeleine McCann vanished. The screenshot has been put through the translator, which produces rather fractured English, but is understandable.

Moreover, that original article was linked by Zelo Street yesterday, so Rupe’s downmarket troops are a day behind even a humble blogger. But their non-exclusive presses the right buttons with the target audience, makes folks frightened of foreigners, and might even sell a few more papers, so that’s all right, then.
Posted by Tim Fenton at 09:54