With the inevitable certainty of night following day, Dennis Rice, now outed as the Twitter buffoon Tabloid Troll, continues his increasingly pointless self-justifying rants as he journeys slowly away from the mainstream of credibility. Along the way, he seeks to scare off those who have caused him distress with suggestions that He Knows Where They Live. It’s hilarious, but ultimately rather sad. 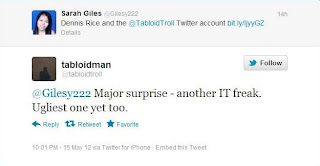 And, all the time, the impression is given that paranoia is starting to take hold of poor deluded Dennis, and this is – allegedly – all down to the Media Standards Trust (MST). Apparently, all was sweetness and light in the Tabloid Troll world until he began to have a go at them, and the Hacked Off campaign. Then, sadly, those rotten folks who don’t appreciate Z-list hacks started on him.

This is, of course, total crap: the events that led to Rice overreaching himself and being unmasked by the serially tenacious Tim Ireland of Bloggerheads fame have nothing to do with Tabloid Troll going after the MST or Hacked Off, as you can see HERE. Any wound was completely self-inflicted, or, in cricketing parlance, which Dennis might understand better, he played the ball onto his own stumps.

But, rather than accepting that he’s been rumbled, and that it was his own fault, Rice has failed to observe Healey’s Dictum and dug himself in deeper, continuing to rant at Tim Ireland, who he has called “an IT freak”. Dennis fails to understand that, without those with the Ireland skill set – search engine stuff, basically – he wouldn’t be able to sit there and get information from the web. 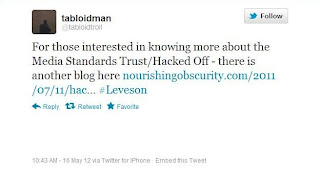 So, given his frankly barking take on the world around him, it’s no surprise that Rice has become fixated on an equally barking blog to justify his paranoia over the MST. How barking is the blog concerned? Well, it’s one of those that attributes all manner of crackpot conspiracy theories to a non-profit organisation called Common Purpose, and claims that the deeply subversive Guardian is assaulting the Murdoch empire.

Moreover, Dennis’ latest favourite blog tells that the BBC is also in on it, and that the MST is a “Trojan horse fake charity”, which the lefties are going use to replace the PCC. It’s not just Barking, it’s overrun the buffer stops at Upminster. And Tabloid Troll Dennis Rice is so paranoid that he is drinking it in like so much Kool-aid. That is, when he’s not protesting about others’ use of free dissenting speech.

[UPDATE 24 May 1800 hours: Rice attempted to forestall the inevitable, reporting Tim Ireland to Thames Valley Police in an effort to put him off. The most cursory investigation beforehand would have told him that this was Not A Very Good Idea. The wheels of Police procedure have duly spun slowly around and the force has confirmed to Ireland that they have no intention of interviewing him.

And now we know that, despite Rice claiming that an investigation was in progress, there was no investigation. As a result of this, Tim Ireland has now published in full the email he sent Rice which the latter characterised as a "nuisance message". The only nuisance, as can be seen, is that Rice clearly found one or more of the questions posed inconvenient to him.

I'm sure that Dennis Rice knows where all his critics live. Or pretends he does. What a sad loser]
Posted by Tim Fenton at 15:25

To be entirely accurate, on one of the many occasions @tabloidtroll claimed an investigation was in progress, he MAY have been briefly technically right about their investigating his complaint at one brief stage, but police are clear that I was never a suspect, and it was this that Dennis was clearly implying/claiming.