The case of abducted toddler Madeleine McCann remains in the news, and this time round, it is not the Desmond press that is making the running – maybe being taken to the cleaners for all those made-up stories has made Dirty Des and his editors a tad more cautious – but Rupe’s downmarket troops at the Sun. And today has brought another slice of dodgy detective work from them. 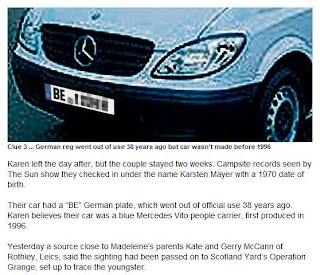 And the Sun has rigged the number plate marking

A sighting on a camp site near Fuengirola just three days after the disappearance is the latest Costa Del Sol lead, following the supposed revelation that Maddie had been seen at a restaurant near Nerja – the other side of Malaga – reported last month. But now we have Germans – and that means it’s Teutonic and sinister – with dodgy number plates. And an extra child.

The name on the by-line is Antonella Lazzeri, who last week claimed an “exclusive” with a story that had been lifted from a piece published three days earlier in the Público. Once again the “exclusive” tag is deployed, as readers are told of “A blonde girl identical to Madeleine”. To no surprise at all, no photo is available. But the German family paid for an extra child.

So the extra child was the Maddie lookalike? The Sun doesn’t know. But the car these Germans arrived in had dodgy plates. The allegation is made that it had a registration mark beginning BE, which had not been issued for almost 40 years. And here, anyone who has visited Berlin recently will hear their bullshit detector sounding long and loud. There’s a simple explanation to this.

The registration mark for the city of Berlin begins with B (Frankfurt am Main begins with F, Koeln with K, Hannover with H and so on). This is then followed with a combination of letters and numbers, usually one or two letters and then up to five numbers, which builds up to produce a unique registration mark. That second letter could quite easily be E, although separated from the B by a space. 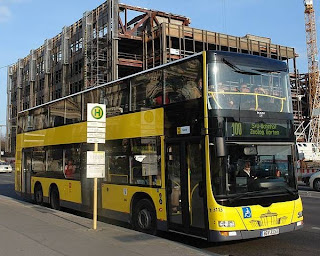 That space is then emphasised by putting the small disc confirming that the mark was issued in Berlin between the first and second letter groups. This can be seen in this photo of a Berlin double decker bus, an image that will be familiar to anyone who has been following the saga of the New Bus for London (aka the BozzaMaster) and the reason it won’t have any export demand any time soon.

So a registration plate B [space] E [numbers] isn’t dodgy at all. It’s just another example of shoddy journalism designed to con gullible readers and ramp up sales and web hits. So Rupe and his troops keep making money, while the McCann family keeps getting put through the wringer. That’s the amount of progress that has been made with this case over the past five years.

And the paper leading the charge has changed. That’s not good enough.

[UPDATE 9 May 1035 hours: the Express has churned this story over, a day late, but interestingly appears to have spoken to the campsite owners. The result of the conversation, where they revealed that car registration marks were regularly given to Police to check, suggests the Sun's hunch is wrong. Also, the Express only says that the car owner, named as Karsten Meyer, was "thought to be German".

At which news, those with any knowledge of Europe's German speaking areas may experience the penny dropping. Meyer may equally have been Swiss, and that country has the solution to the registration plate mystery: its capital city Bern issues marks beginning BE. So there may be a straightforward explanation (Swiss German sounds very different to the trained ear, but to the average Brit who doesn't speak any other language, well, these German speakers may all sound the same).

Investigative journalism versus shock horror cheapies that sell a few more copies. High principles, and all that]
Posted by Tim Fenton at 11:19