Those who might have thought proceedings at the Leveson Inquiry were becoming all too routine missed a rare glimpse into newspaper history today, and a telling insight into the mindset of Rupert Murdoch, as stepping out of the past and into the courtroom came former Sunday Times (and briefly Times) editor Harold Evans, a figure from the days when those titles made both money and headlines. 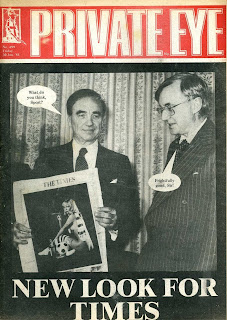 The Eye predicts the move downmarket ...

When Rupe, aided by the happily coincident decision of Margaret Thatcher not to refer the deal to the Monopolies and Mergers Commission following his visit to her, took over the Times titles, it was widespread knowledge in Fleet Street that Evans would not sacrifice his principles, and nor would Murdoch be put off his customary cost cutting and drive downmarket.

So, before Rupe pushed him – and the word on Grubstreet was that this was inevitable – Evans jumped, and thus ended a fifteen year stint editing the Sunday Times (and honing its reputation for the very finest British investigative journalism) and a strangely adversarial and fractious relationship with Private Eye, one of those unexplained niggles from the era of Richard Ingrams. 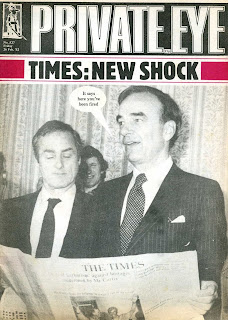 ... and the departure of Harold Evans

Evans’ insights to Leveson included Murdoch’s denial at the time that he had attended that meeting with the PM, and that Evans had been part of a management buyout bid for the titles, which explains much of the mistrust Murdoch had for him. Rupe sacked editor-in-chief Denis Hamilton, and Australian staff at the Sunday Times warned that he couldn’t be trusted.

And it did not take long for Murdoch to intervene over the head of Evans, instructing journalists to change their stories and the Times’ editorial line. He was particularly keen on going after the Eastern Bloc and its leaders, and wanted a more sympathetic line towards the problems faced – before the Falklands War – by the Thatcher Government. And he misled Evans over staff cuts.

But it was Evans’ descriptions of his then proprietor – calling him “evil incarnate” and telling that “He had his heart removed long ago along with moral faculties and human sensibilities” – that will linger in the memory, along with his recollection of the “vindictive, punitive” atmosphere that Rupe brought with him. The man who brought us Fox News Channel (fair and balanced my arse) dubbed Evans a “communist”.

Harold Evans has merely confirmed what many already suspected: Murdoch was dishonest about how he took over the Times and Sunday Times, he gave assurances that he then blatantly broke, he interfered in the running of the titles, and sacked and forced out anyone and everyone that stood in his way. There was Rupe’s way, and there was the way out.

And he did it all with the Government in his pocket, a truly frightening thought.
Posted by Tim Fenton at 18:12