Sun Sets On The Tabloid Troll

The lack of up-to-date news in the Evening Standard (aka London Daily Bozza) has been highlighted by a piece by Richard Godwin on anonymous Tweeters, which he elevates to the status of “secret Twitter stars”. But one of those “secret stars” has been unmasked this week, as I noted earlier. And Dennis Rice, the former hack behind the Tabloid Troll account, is not happy about his situation. 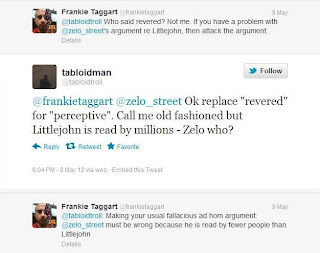 Sadly, Rice is as good at getting his ducks in a line as he is with his “journalism”. So snarking “Zelo who?”, having already blocked me, merely reinforces his lack of credibility, as does the protestation “I am a tabloid hack first and last”, which he is not, having left his last post in real journalism some years back. But the faux gesture of defiance may persuade the more gullible.

And then comes his explanation for deleting his blog “revelations” about Rich Peppiatt, whose sole crimes have been to get out of the business with his dignity intact, and be moderately successful afterwards. “I have made my point(s) and want to move on” he tells, in true Tony Blair style. But bloggers don’t, generally, go round wiping their back catalogues. There’s too much useful reference stuff in mine.

In any case, the defiant Tabloid Troll wants everyone to know that he’s considerably more important than they are. “My words in the real world [my emphasis] get read by 7 million people, not a new thousand agenda-loaded crazies on Twitter” he protests, unaware that the world of hackery and that of Twitter is one and the same. And he’s in no position to lecture others about being “agenda-loaded”. 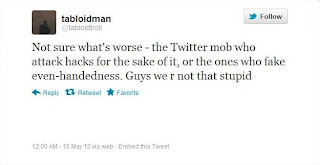 And he knows who’s to blame: it’s that “Twitter mob” who “attack hacks for the sake of it”. Whoever can this be? This wouldn’t be another example of blaming the medium because it doesn’t love him enough, would it? He should stop being so thin-skinned and grow a proverbial pair.

But he knows why there are all these attacks: it’s folks who wanted to be hacks and weren’t good enough. But he’s the passed-over Major here, so clueless and desperate that he values the support of those who only pretend to be journalists. 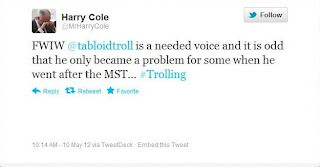 Yes, Tabloid Troll’s appreciation of kind words extends to the singularly unsavoury flannelled fool Henry Cole, tame gofer to the perpetually thirsty Paul Staines at the Guido Fawkes blog, who in true paranoid style thinks that the deeply subversive Guardian is behind the Troll’s fall from grace. While the Troll boasts of his shorthand capability, Cole wouldn’t know Pitman’s from a hole in the ground. He’s a pretend journalist, saying “file” and “copy” to make it look like he’s the real deal.

Any port in a storm for Dennis Rice, the Tabloid Troll who is now slowly, and sourly, walking towards the exit door, blaming everyone else for his own stupidity, and claiming that he’s still a big star. It’s just Twitter that got small.
Posted by Tim Fenton at 17:46

In one of his (now deleted) posts he spent a number of paragraphs defaming me. I was about to post a reply, and now I cannot.

But what I was going to say was this:-

The fact is that TabloidTroll wanted to have control over interaction - to be able to say what he wanted about who he wanted with the (piss-poor) justifications he wanted to give for doing so.

And he just could not take being challenged.

The whole thing was a telling clash of old and new media.

What he missed is that there is a positive story to tell about tabloids, even in this Leveson age.

It is very difficult to write well and succinctly for strangers.

It is far more difficult to write a tabloid article than a broadsheet one.

Instead of TabloidTroll's nasty attacks on the critics of tabloids, he and others should be promoting what tabloids and tabloid journalists do well.

Bloggers and tweeters actually have a lot to learn from tabloid writers.

But some (though not all) tabloid writers have a lot to learn about the internet.

I would suggest that Tabloid writers learn a little humility too. When London taxi drivers were asked what did they miss on the demise of the NOTW the majority said the sports pages and then a fair proportion of them said they didn't actually believe a lot of that reportage either.
So any claims to be "read" by x amount of readers should be taken with a pinch of salt.

Unfortunately though, David, even the most cursory glance at Tabloid Troll's blog revealed that he did not write well. By the time you'd drudged through the morass of syllogistic fallacies, equivocations, red herrings, conspicuous shifts of the burden of proof and plain old mendacious inaccuracies, it was entirely unclear what point he was trying to make anyway. The only thing he has to teach anyone about tabloid writing is that reporters often come across as rather dumb when they don't have a literate sub-editor to hold their hand. What tabloid journalism needs right now is a genuine champion - someone who can defend a noble art with cogent arguments, no small amount of charm and an ability to write. Tabloid Troll was just what his entirely irony-free Twitter handle suggested - a troll.

A great point by Jack of Kent in defence of tabloid writing.

He actually did in the sentence per paragraph tabloid style.

Tabloid actually derives from the concept of a health giving tablet.

Something you can swallow and ingest in a short time.

However, Tabloid Troll, as with many journalists on twitter, have been so used to the megaphone of a one way passive press, that they've forgotten the basic rules of debate and logic.

I'm never abusive, and yet I've been blocked by Toby Young, Sean Neill, and Tabloid Troll himself, merely for point errors in their tweets.

So much for free speech and open debate.

I've seen it time and time again, from Fleet Street Fox to Tabloid Troll himself, an inability to respond to challenges without reverting to insults and ad hominem abuse.

In Tabloid Troll's case it ended up in physical threats: ad baculum.

That level of personal abuse is the norm in the British tabloids, and the impunity of Fleet Street ended up in the culture of hacking, bribes and worse.

It's not the populism of the tabloids anyone objects to, its the underlying philosophy of a large part of it: the politics of personal destruction.

If I didn't know better, I'd think @TabloidTroll was created by Hugh Grant or Steve Coogan to cast tabloid journalism its worst imaginable light. Of course, we all know who he is.

His personal attacks reveal more about his own inadequacies than those of his targets.

Happily, @TabloidTroll reinforces the lessons we teach primary school children about bullies and cowards - and how abusers abuse because they are not comfortable in their own skin

I just looked at your poetry website. Very inspiring. Keep up the good work.