Not Worth Giving It Some Pasty

The Coalition has decided, via the office of the Rt Hon Gideon George Oliver Osborne, heir to the Seventeenth Baronet, to placate the populus, and more importantly the cheaper end of the Fourth Estate, by reversing its decision to slap the full 20% VAT rate on Cornish Pasties and sausage rolls served above ambient temperature, though those Asda cooked chickens are not reprieved. 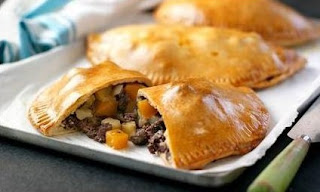 Moreover, the attempt to apply the same VAT rate to static caravans will also be reversed, albeit not completely: these will still be subject to the lower 5% rate, and as Zelo Street regulars will know, countries around the EU have found additional tax revenue by moving items up the VAT scale. The thought has occurred, though, as to whether this move is going to do the Government any good.

The papers that shouted loudest will certainly benefit, if only in the short term, in moving a few more copies. And the reputation of the Super Soaraway Currant Bun as a title that has influence has been burnished openly today: while the Mail ran an extensive piece on this particular U-turn, the Sun made sure readers knew it was Them Wot Won It.

So what of the effect on the popularity of George’s jolly good neighbour Young Dave? Sadly, recent history suggests that the two of them might as well not have bothered, and to illustrate this we need go back no further than events in 2008 following the fallout from Pa Broon’s last budget and the lead-up to the Crewe and Nantwich by-election.

Realisation was gradually dawning that the reduction in the basic rate of Income Tax to 20%, along with the removal of the 10% rate, would produce losers as well as winners, and the former would include many workers who were among the least well off. This merely reinforced the falling popularity of the Brown Government and the prospects for Labour to retain the seat they had held since it was created.

So measures were taken to help those disadvantaged by the tax changes. Labour MPs, briefly uplifted by the news, declared that the Tory fox had been shot. It made no difference to the party’s popularity, and the by-election was lost. One might have thought that Osborne, who was even prepared to stand in the concourse of Crewe station handing out leaflets, would have taken this lesson on board.

Seemingly not. As Tone’s former spinmeister Alastair Campbell keeps telling – the number of blogposts where he reminds his readers is countless – the Government does not appear to have a strategic approach, and therefore stumbles from one shambles to another, with the shambolic events occasionally combining to produce a political car crash of humiliating proportions.

Can they carry on like this for three more years? Maybe not.

[UPDATE 1405 hours: it's been brought to my attention that Mark Samworth, a director of the firm that owns Ginster's - who have protested against the "pasty tax", and have been rolling out a hot pasty offer to over 200 outlets - donated £100,000 to the Tory Party some weeks after the Budget, but before Osborne performed his U-turn yesterday.

Naturally, the usual denials have been made: all in a personal capacity, Ginster's hasn't lobbied Government (although no word on whether its parent company Samworth Brothers has), and of course the Tory MP for South East Cornwall is standing by the Chancellor. Does it stink, or does it stink? Well, on balance, I have to conclude that it does in fact stink]
Posted by Tim Fenton at 13:13