Well said Bob Ainsworth, I thought after reading that the former minister had stated the obvious about the so-called “war on drugs”. But almost immediately another thought entered – that his intervention would, ultimately, have no effect at all. Predictably, Ainsworth has now been slapped down by Mil The Younger, rubbished by a Tory spokesman in a routine act of political advantage play, and has provoked the usual response from the Daily Mail.

The headline generated by the legendarily foul mouthed Paul Dacre’s tame hacks was all too predictable: “Ex Minister condemned as ‘irresponsible’ by party for drugs U-turn” it screamed. But looking beyond the article to the comments – all of which have been moderated before publication – yields a glimmer of hope. 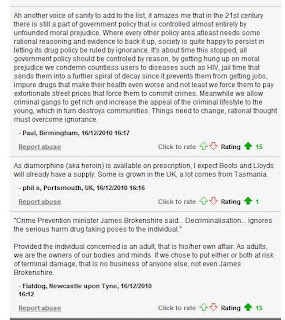 Readers are showing that they have realised what the Mail’s editor refuses to: that the “war on drugs” is not working. The numbers, as I observed recently, put this in sharp focus: one and a half billion a year spent, no more than 1% of currently illegal drugs taken off the streets, plus an unquantified amount spent on prosecuting drug related crime, and imprisoning many of the offenders.

Moreover, yielding the supply of these drugs to organised criminality has made them far more dangerous, due to the use of a variety of substances to pad out the pure drug to make it go further, and yield more profit for traffickers. Those wishing to retain the status quo cannot, or will not, take on board that much of the danger of these drugs is down to their adulteration.

So why can we not have the debate on currently illegal drugs, and the failure of current policy? And can someone explain why Paul Dacre, who is chauffeured from his country pile to city apartment to office, and then back again, without having to soil his personal space interacting with the general public, should enjoy such a disproportionally large say on the matter?

We could at least decriminalise the use of these drugs, as has been done in Portugal without the sky falling in, and thus remove the stigma that a habit brings. This would give addicts the reassurance that they could get help and advice without the threat of criminal sanction.

Or we could carry on as before, despite all the evidence that the current approach does not work, has not worked, and will not work in the future. This should be a no-brainer.