If a British citizen has relatives in Africa, India or the Far East, does that make that person an immigrant? Well, no: all it means is that they have relatives that live in another country – unless, of course, you’re a part of the empire of the legendarily foul mouthed Paul Dacre, and you want to demonise politicians.

And one politician that Dacre’s finest love demonising is Harriet Harman, who had been speaking at a meeting at Southwark Town Hall, in her Camberwell and Peckham constituency. Ms Harman had observed that many of her constituents, who have relatives in west Africa, sent money to help those relatives, even though they were not well off, and receiving benefit payments.

Now, had those people been putting the money into the collection plate in church, or giving to charity in the UK, the Mail would not have raised a peep. But because it was going “abroad”, the language had to be suitably changed. So the constituents were “sending money back home”, and Harman’s comment about the “hidden heroes of development” was translated into the headline “Harriet Harman praises 'hero' immigrants who send welfare handouts home” (it’s a “handout” when demonising is in progress).

Are the people sending money to relatives in Africa actually immigrants? Dacre and his obedient hacks don’t tell us: after all, this would introduce shades of grey into an argument that, in characteristic Mail style, can be only black and white. The thought that some people are showing charity to those less fortunate than themselves is not allowed to enter. 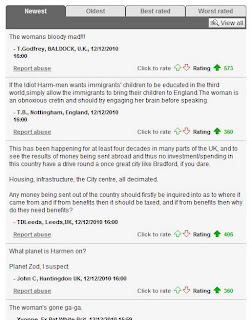 As to the target audience for this article, one need look no further than the comments posted, all of which have been “moderated” prior to publication. The one at the foot of the captured image is signed “Yvonne, ex-pat White Brit”.

It’s rabble rousing, racist, and just plain nasty. So it fits neatly into the agenda that Paul Dacre and his coterie of obedient hacks are pushing. Once again, no change there.