He got his why-oh-why copy into the Daily Mail, but Harry Mount is not a happy man, because he journeyed out to Suffolk to talk to former Fayed flunky Michael Cole mainly by rail, and his journey was delayed. For having the temerity to run late and suffer a breakdown, operator National Express East Anglia (NXEA) have become the subject of Harry’s bizarre and only occasionally coherent rant on the Maily Telegraph website.

From reading his piece in the Mail, much of which could have been written in the office – and probably was – one might think that Mount was just another Dacre hack delivering stories to fit his legendarily foul mouthed editor’s agenda. Cole, ever the PR man, has succeeded in inflating his irritation at a neighbour’s new wind turbine into a supposedly real story, although Mount does not seem to have interviewed anyone other than the Coles about it.

The copy thus produced confirms what is already known: the Mail thinks wind turbines are rubbish. But Harry has concluded that rail travel is also rubbish, although this for some reason was not published by the Dacre press, but by the Telegraph. “Forget the bad weather – blame the fools, liars, layabouts and thugs who work on our railways” thunders the headline.

However, Harry does not back up his characterisations except in the retelling. And, had he made the most cursory of enquiries before setting off, he would have known that services on NXEA were subject to delay and cancellation because of the severe weather. I can be certain of this, simply by checking out the “service disruptions” part of the National Rail Enquiries (NRE) site. 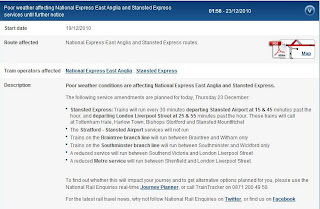 As can be seen, the problems on NXEA were first notified on December 19. Mount doesn’t say when he travelled, but I doubt it was on a Sunday, so his journey must have been last Monday or Tuesday. That he apparently didn’t bother taking a couple of minutes to check NRE isn’t the fault of NXEA, who may well have had traincrew out of place because of weather delays.

And much of the supposed “sub-text” Mount uses to damn others is his own invention. The problem for overmonied hacks is their inability to understand the complexities of organisations like the railways: as a result, they all too often substitute ridicule and invention for actual knowledge, then end up looking even less credible as a result.

Harry Mount might benefit from a few weeks’ work experience in the real world. But after his rant on the Telegraph’s website, he should avoid any invitation from the railways. After his outrageous and baseless slanders, he might not keep well.