Express – But Not Anywhere Near The UK

Hard on the heels of the Daily Mail going after train operator SouthEastern by using a photo of a station in Scotland comes the Daily Express, determined to go one better.

The Express, adopting the rhetorical question style beloved of Fox News Channel (fair and balanced my arse), has started a “Have Your Say” feature asking “Are Rail Firms Ripping Off Their Customers?”. To help their readers to come to a suitably fair and balanced conclusion, it helpfully tells of fare rises “of up to 46 per cent – 14 times the rate of inflation”.

In the crosshairs of the Express hacks is operator First Capital Connect (FCC), which is responsible for the increase mentioned, although of course not all their fares are rising at that rate. 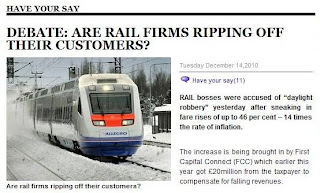 But the attack on FCC is not helped by the Express hack’s choice of photo. Anyone not recognising the train pictured will not be alone: although this is a very modern train, and only entered service last Sunday, it did so between Helsinki and St Petersburg.

That would be between Finland and Russia, and not anywhere near the UK. So no change in the Desmond press' level of accuracy, then.