Just one detail can undermine the credibility of a hack’s copy. And then the reader becomes more quizzical, more sceptical, finding more holes in the argument. It’s something many will be familiar with when scanning the red-tops: the discovery of such copy in a supposedly quality paper for me is a recent development.

My latest discovery of these falling standards came in a scan of the Maily Telegraph website, in an article penned by the grand sounding Ambrose Evans-Pritchard. It has an equally grand title, telling of “EMU’s Máquina Infernal”. Sad to say, though, that this is a mere veneer of credibility. And the detail that gave the game away? The photo at the top of the piece.

It shows Porto’s Dom Luis Bridge, looking from the south bank of the Douro. But it’s a very old photo: the top deck of the bridge has for some time now been closed to road traffic as it is used exclusively by the city’s new Metro. And to the right of the city wall in the background is the Guindais funicular, recently built and linking the lower Ribeira district with the upper Batalha one. 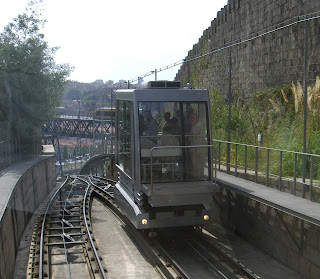 What doesn't exist in Telegraph land

So what? Well, if you can’t even bother to get a photo that reflects current reality, all the grand titling and bylines won’t save your copy from a good fisk. Evans-Pritchard concedes that the Portuguese banking system is sound, yet compares the country with Ireland, where the banks were much of the problem. He states that much of the country’s debt is in private hands, but airily asserts that it will somehow fall on the taxpayer to repay.

Evans-Pritchard then asserts that Portugal’s banks have a dependence on external funding so he can compare them with Northern Rock. It’s a spurious comparison: the latter was hardly behaving responsibly when it urged customers to take on 125% mortgages. And whether his figures for current account deficit come from before or after this year’s budgetary measures (discussed HERE) he does not say.

Moreover, he paints Ireland as enjoying future growth (where have I heard that before?) and telling of an IT and pharmaceutical sector driving it. He fails to mention that Portugal, in places such as Coimbra and Oeiras, has similar and growing industries.

The future for Portugal may not be bright. But that is no excuse for sloppy and partisan hackery: Evans-Pritchard’s article has clearly been written to meet the Telegraph’s euro-knocking agenda. No wonder his paper is now known as the Maily Telegraph.
Posted by Tim Fenton at 09:57