The suburb of Barceloneta (“Little Barcelona”) was for decades a place without: away from the city, it was where fishing folk lived and worked. The grid pattern of narrow streets gives the neighbourhood an intimacy, with everyone living very closely together. 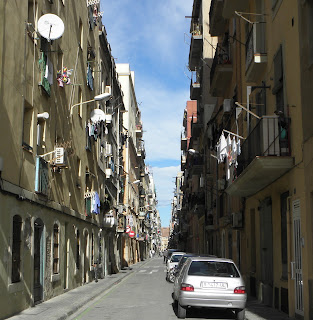 Midday in Barceloneta
And it still is a place apart: behind the touristy, glitzy and overpriced main drag at the west side of Barceloneta, this is still a working people’s suburb. And despite being so close to the city, the symbolic presence of a busy dual carriageway road, and behind that the approach to the Estació de França, on its northern fringe effectively cuts it off from the rest of Barcelona.

That impression is reinforced by there being a Barceloneta Metro station, but knowing that you have to cross that dual carriageway to reach it. Having said all of that, it’s a part of Barcelona that should not be missed from any good tour.
Posted by Tim Fenton at 18:16