BBC Newsnight - We Have To Talk

This blog prefers to give the BBC, and indeed all mainstream broadcasters, the benefit of the doubt, even when claims of prejudice and bias are swirling around. Most of the time, the Corporation does its best to steer a path free of partiality, and succeeds in its efforts. But one part of its reporting on the fallout from the Salisbury poisoning has given cause for concern. And I have to tell the Beeb that the concern is justified. 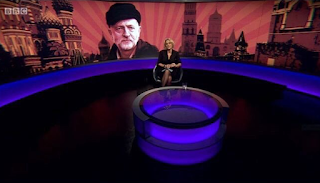 While the Government, cheered to the rafters by the right-leaning part of our free and fearless press, has wasted no time in pointing the finger for Sergei and Yulia Skripal’s poisoning with a nerve agent from the Novichok family straight at the Government in Moscow, and in the wayward world of former very occasional London Mayor Alexander Boris de Pfeffel Johnson, straight at its head, Jeremy Corbyn had urged caution.

The Labour leader has pointed out that Novichok nerve agent may have fallen into the hands of one or more of the mafia organisations that have sprung up since the collapse of the former Soviet Union; it has already been admitted by the Government that Novichoks can be manufactured in more or less any suitably equipped laboratory. 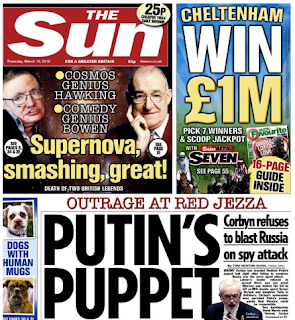 For this caution, Corbyn was instantly vilified by the right-wing press, the Mail and Sun asserting that he was in hock to Vladimir Vladimirovitch Putin. Terms such as “puppet”, “stooge”, and “appeaser” were deployed in support of these claims. The BBC should have been aware of the sensitivity of the subject when Newsnight came to cover it.

So the dismay expressed by many, and not just on the left, at the deliberate linking of Corbyn and Moscow, was entirely understandable. There was presenter Emily Maitlis, in a studio whose backdrop was, as Billy Connolly once put it, loaded. A supposed vista of Moscow sights, with Corbyn front and centre, with even his usual headgear changed to make him look just that little bit more Russian.

Coming hot on the heels of that morning’s papers and their incendiary headlines - the Sun’s “PUTIN’S PUPPET” and the Mail’s “CORBYN, THE KREMLIN STOOGE” at the forefront - there can be only one message being conveyed here, and it is that of Jezza siding with not just a foreign power, but the gangsterist Putin régime. 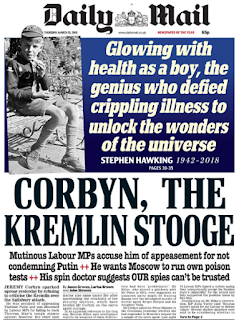 What did not help the Corporation was when the following night’s show, still with the faux-Moscow backdrop, had Evan Davis countering Owen Jones’ arguments in support of the Labour leadership by saying “but the public support Theresa May by two to one”. We should now decide foreign policy stances on instant poll ratings and take our cues from organisations just as adept at mafia-style behaviour as that in Moscow.

The BBC cannot always get it right; that is understood and some slack should be cut it on those occasions. But that Newsnight backdrop was not an accident. It was a deliberate linking of Jeremy Corbyn and the Government in Moscow.

Newsnight got that call seriously wrong. And that’s not good enough.

It was of course disgraceful and nothing less than utterly deliberate rightie propaganda. Whoever concocted that backdrop is a liar and a coward. Which must include the editor, graphics technician and Maitlis (if she didn't object).

It was a sheer delight to see Owen Jones completely destroy the empty headed and increasingly bizarre Davis. But it's only the most recent example of how BBC News has handled this issue - they've been just as bad, sometimes even worse, than the usual press shithouses. For an example, see hysterical Sweeney's fruitloop "contributions".

I'm all for throwing the book at whoever did this to Skripal. To do that, I need evidence. So far all we've seen and heard is a far right tide of appalling propaganda that puts this country to yet more shame. The MayBot and co have ignored all the agreed international protocols, let alone the democratic concept of "chain of evidence".

For the fact is the attack could have been carried out by anybody in the seedy, murderous world of spooks. The alleged nerve agent could just as easily have been acquired by fanatical nutjobs in MI6 and the CIA as by their counterparts in Russia - that much is obvious given the admitted slapdash nature of the dismantlement of Soviet chemical weapons.

Moreover, Putin has everything to lose and nothing to gain at a moment when his country is about to stage a propaganda coup with the World Cup. Why do Skripal NOW, after eight years in Britain? Why not when it was easier to induce "a heart attack" or similar while he was in Russia?

At propaganda level the West has much more to gain from this than the Russians. Given the crackpot nature of spookery - see public records and Cornwell's "fictional" contributions - and the complete lack of chain of evidence - it is just as likely to be one of the West's notorious false flag attacks. At times like this nothing is off the table.

The whole thing stinks to high heaven of a Thames wharfside rat. At the moment the biggest rat is British mainstream media, press and broadcast. Democracy, if it's to mean anything, is supposedly designed to protect honesty PRECISELY at times like this. But who in their commonsense would trust British mainstream media, given its public record of lies, hypocrisy and corruption, which equally notoriously extends into Parliament, Whitehall and "business" circles. People in decaying glasshouses shouldn't throw stones.

Meanwhile, let's see where honest, verifiable evidence takes us. We either believe in genuine democratic law or we don't. So far British institutions are batting zero.

Where is the Right Wing's equal outrage at Russia's largely proven interference in the Referendum? If the Kremlin's probable involvement in the murders of Putin opposition figures in the UK is enough to return to Cold War levels of antagonism, why isnt the clear manipulation of the Brexit vote leading to calls from the Right for the result to be nullified?

Anonymous, is that you?
It's almost unrecognisably measured and reasonable. And correspondingly much more persuasive than your usual ignorable ranting.