Watching Him Watching You – 5

As promised last week, I’ve been keeping tabs on the survival of the second poster of Young Dave deployed near Crewe town centre. And the result is a kind of neither here nor there state: the poster has been subject to some tearing, but most of it has survived the weekend. 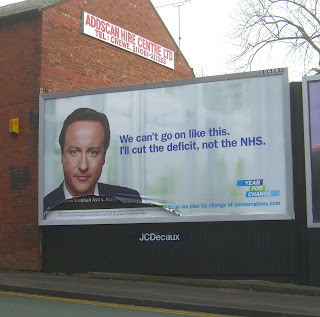 Whether the bookies would pay out on any wager on the poster becoming defaced yet again I don’t know. Maybe this one was secured to the hoarding rather better.

The NatWest poster next door has not been damaged at all, which tells you something about the local popularity of Young Dave vis-a-vis all those bankers.

Meanwhile, the Tories have moved on to education, and Steve Bell has helpfully provided his own illustration of Young Dave for our perusal.
Posted by Tim Fenton at 18:34