Watching Him Watching You – 2

As we were warned by the heir to the Seventeenth Baronet, the giant size image of Young Dave has indeed appeared on a number of billboards around the country. And it has not met with universal acclaim: one hoarding in London was spray painted to remove the “not” from Cameron’s NHS promise, and had the Beeb added to the list of alleged cuts.

Here in Crewe, we need not have felt left out, as the Tory poster campaign left its mark on the hoarding outside the Addscan Hire Centre on Edleston Road. The grand image of Young Dave went up in midweek, and gazed out over the passing shoppers for all of four days. 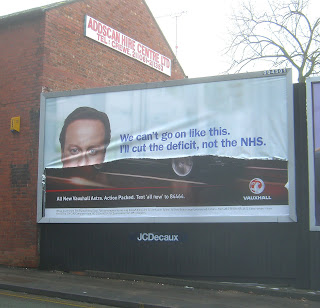 Because, alas, the poster did not survive Saturday night intact. There was no spray paint, but by yesterday, the bottom half of it had been removed. This makes the image of Cameron look even worse, and does suggest that its display did not meet with universal approval.

As some pundits talk of Cameron winning the upcoming General Election with a small majority – less than 20 – Edward Timpson might well ponder on the last time the Tories won with that kind of endorsement. That was in 1992, and Crewe and Nantwich remained, although with a majority of less than 3,000, Labour.

[Anyone wanting a fuller set of Cameron poster amendments can find them over at the Liberal Conspiracy blog, courtesy of the routinely mischievous Sunny Hundal]
Posted by Tim Fenton at 15:46