UKIP - “Out Of Control” Aides Named

Morale and behaviour among Nigel “Thirsty” Farage’s fellow saloon bar propper-uppers at UKIP are starting to deteriorate, as Mr Thirsty has gone back on his commitment to stand down after failing - yet again - to win a Westminster seat last week. There have been calls for him to go anyway, but there has also been some pretty vicious counter-briefing from within the party. Zelo Street is here to name names. 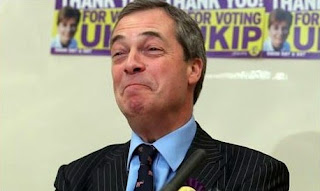 The latest round of internal Kipper blood-letting was precipitated by yesterday’s refusal from sole surviving UKIP MP Douglas “Kamikaze” Carswell to take up the entire £650,000 allocation of so-called “Short money”, despite apparent suggestions from the Farage camp that he do so, and take on several more staff to justify the idea. Carswell is that rare thing, a politician of principle. He has, it seems, stood firm.

Helping to add petrol to the blaze this morning has been a piece in the Murdoch Times by Laura Pitel, citing UKIP economics spokesman Patrick “Lunchtime” O’Flynn, and claiming that Farage “had in recent months moved away from being a ‘cheerful, ebullient, cheeky darling’ politician”. O’Flynn then blamed Farage’s team of “aggressive” and “inexperienced” aides, saying he must “clear out” these people. 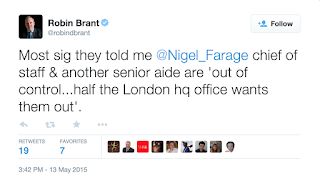 Whoever can he mean? Fortunately, we have the good offices of the BBC’s Robin Brant and Norman Smith to help narrow down the field. Brant yesterday took to Twitter to tell “Most sig they told me @Nigel_Farage chief of staff & another senior aide are 'out of control...half the London hq office wants them out’”. With the positive ID bells now jangling long and loud, over to Smith’s recent Tweets. 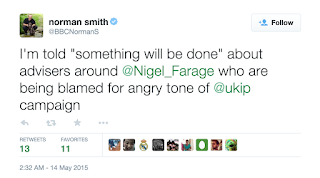 In the early hours of this morning, he told “I'm told ‘something will be done’ about  advisers around @Nigel_Farage who are being blamed for angry tone of @ukip campaign”. Curiouser and curiouser: who can they mean? Well, into the Zelo Street inbox came the answer early doors: two named individuals, I was informed, “faced the axe”. Both will be familiar to regular readers of this blog. 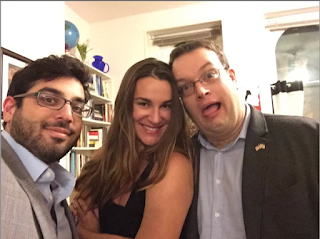 The first is all too obvious: Farage’s “chief of staff” is Raheem “call me Ray” Kassam. Why he should be looking at the exit door was not immediately obvious - until I read Ms Pitel’s article, and the Brant and Smith Twitter feeds. But who is the other miscreant? Ah well. Here, a recent photo may prove instructive: Kassam is instantly recognisable at left. The bloke on the right is Matthew Richardson, a recent Kipper hire.

Richardson, it may be remembered, was hired “to keep ‘bad stuff’ hidden from the public”. My information is that he is “another senior aide”, and the other one of those “advisors around Nigel Farage”. My information is also that both of them may be looking at the world outside Kipper Towers sooner rather than later. It couldn’t happen to two more deserving fellows. UKIP is fast becoming a most unhappy place.

Will there be more blood-letting later at UKIP? Don’t bet against it.

[UPDATE1 1420 hours: the original of this post was published at 1229 hours. At 1240 hours, the perpetually thirsty Paul Staines and his rabble at the Guido Fawkes blog claimed that Richardson had tendered his resignation.

It was then claimed by Mark Wallace of ConHome that Richardson was going anyway, but his contract is apparently up next month - not this. The impression is given that Wallace's informant was very close indeed to Richardson - close enough to be him.

That Kassam and Richardson were indeed the two advisors targeted by Carswell and O'Flynn has now been confirmed by Rowena Mason at the Guardian. Meanwhile, it seems Kassam, who is over in the USA right now, has said he will not be resigning.

That "call me Ray" will depart Planet UKIP sooner rather than later is not something that this blog is even considering modifying right now. If he doesn't go, my information is that he will be caused to go. Watch this space]

[UPDATE2 1630 hours: what did I tell you? Raheem Kassam, it has now been confirmed by the UKIP leadership, has left the Kipper building.

So less than four hours from when Zelo Street confirmed that Kassam and Richardson were the two advisors targeted by Patrick O'Flynn, both have gone.

What we do not yet know is whether Mr Thirsty himself may depart the party that some are starting to look upon as a personality cult. That would, of course, be his second departure in a week.

I'm amazed that Kippers are only just waking up to the fact that UKIP is a personality cult. It's always been about the cult of Farage.
Am enjoying this debacle immensely.

Re Spinning the cult