When the Sun’s crime editor Mike Sullivan was released from bail just over two years ago, and told that he faced no further action as a result of the Operation Elveden investigation, his colleagues rallied round very publicly. Among those rallying round were Fiona Hamilton of the Times, and David Wooding of the Sun’s Sunday sister paper. Wooding proudly Tweeted last month “Charges against Sun journalists: 48; Convictions: 0; Cost to public: £20m”. 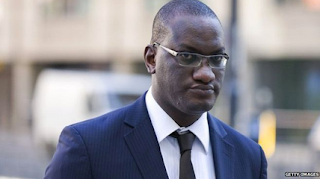 However, and here we encounter a significantly sized however, one of those who Wooding’s pinned Tweet displays was Sullivan’s reporter Anthony France, who yesterday got guilty. As the BBC reported, “A Sun newspaper reporter has been found guilty of receiving story tips from a Heathrow Airport anti-terror officer …Anthony France, 41, from Watford, had denied aiding and abetting PC Timothy Edwards to commit misconduct in a public office between 2008 and 2011”. 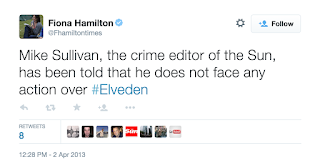 There was more: “Edwards sold 43 stories to France, 38 of which made the paper, in exchange for more than £22,000 … The Old Bailey heard that Edwards, 49, sold the information while working at Heathrow Airport in SO15 Counter Terrorism Command … But the jury was not told that Edwards had pleaded guilty to misconduct in a public office and was jailed for two years in 2014”. 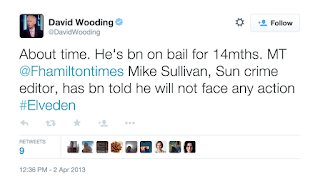 In his defence, “France told the jury he had never been advised by anyone at the Sun that speaking to a police officer - or any public official - could be breaking the law … He also said he would never have become involved in receiving story tips from Edwards if he had known it was illegal”. He claimed that, had he known it was illegal, “I would never have got involved with it. I would have told him to get lost”. France also claimed to have been told by a colleague “I’ve spoken to a lawyer and it’s fine”. That means paying the cop. Which he did. And the Sun paid for it.

Because every other journalist has used a similar defence, which suggests that, once again, it is most unwise to second guess the outcome of a jury trial. What must make it all the more galling for France is that his own news desk fed him the Police contact, which suggests that he was being encouraged to get stories from him. This he did. Are we to believe that nobody at the Sun took France aside and told him to ensure he didn’t reward that contact in any way?

What we do know is that all those Murdoch hacks have declined to put head above parapet today. Although the story has made the BBC, Guardian and a raft of other papers - including the Mail - there has been only a cursory, self-justifying mention at the Sun. Nor have Wooding, Ms Hamilton, Stig Abell, Tom Newton Dunn or any of the others said a word about it. They want the world to know when they are declared innocent, but not when they are guilty.

Anyone reading the Sun would think that its hacks never fall foul of the law, and that any charge against them is part of some kind of rotten lefty conspiracy. What they don’t tell their readers is that they encouraged their staff to get stories from the cops, appear not to mention to them that paying them is illegal while letting them have the money to do just that, and then drop the poor souls in the crap, run away, and pretend that it never happened in the first place.

That’s a pretty shoddy and dishonourable was of treating staff. Anthony France will be right to feel seriously hard done by right now. But, perhaps, he will not be surprised.
Posted by Tim Fenton at 17:29

Read page four of The Sun. There is a story on Anthony France convcition

Francis' conviction is reported in The Sun today (Sat. May 23).
It's a singl colum, from the top of the page.
From memory the report says something like 'a Sun journalist has been convicted for paying police for stories in the public interest.'
The report mentions, correctly, how one of the stories Francis paid for was about airline pilots over the drink drive limit.
What the Sun report admits is Francis' claims, as reported above, that he was told 'I've checked with a lawyer it's fine'.
It is corrected Francis is now, following other appeals, the only journalist convicted in relation to paying police for stories. Dan Evans pleaded guilty.
It appears Francis and Evans are carrying the can for a problem that was bigger than the two of them.
On a slightly different point how odd that while 94 per cent of UK journalist are white the only convicted of paying cops for stories...

Kelvin bullied Kinnock, Newton Done for Ed
Louise bullies teenage girls, The Sun's gone to her head
Kavagh plots with Murdoch, SNP or not
They want a disunited kingdom and not a European Fed

Before the trials of hacking Becky used to rule the roost,
Sharpe crows the PR now, but failed to give sales a boost
So Hopkins and her vile tongue bully foreigners instead
Self int'rest and vanity are queen, truth 'n fairness ...quite dead