It was bound to happen: someone out there on the right becomes so frustrated at the inability of Young Dave and his jolly good chaps to move the polls in their direction, and so desperate to keep Mil The Younger from power, that they resort not only to abuse, but the lowest form of smear. To no surprise at all, that person is the Daily Mail’s unfunny and talentless churnalist Richard Littlejohn. 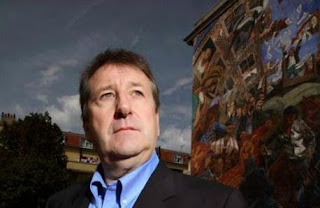 Dicky Windbag clearly shares the anguish of his legendarily foul mouthed editor at the prospect of a Prime Minister who wants to improve the lot of ordinary people, especially as Miliband would be beyond the bidding of the press. So out has come the smearing iron to administer the deed: “Trust Labour? I'd rather trust Jimmy Savile to babysit” snipes the sage of Vero Beach (which is in Florida, and not anywhere in the UK).

Yes, out has come the paedophile smear: kept in reserve just in case it was required, like the fire alarm button behind the glass, the Mail has shown its true colours today. The rest of Dick’s dawdlings are little better: “This whole election campaign has had a surreal feel to it, conducted in a hermetically sealed bubble with only a passing nod to the paying public” he moans, not realising he is in Florida, where there isn’t an election on Thursday.

There is also another outing for one of his flat-out lies: “They also brought you the Mid Staffs scandal, which caused the deaths of 1,200 patients”. Some Mail readers will even believe that. They might also believe “Following Labour's suicidal implosion in Scotland, we are on the brink of an undemocratic constitutional outrage”. Did Scotland stop being part of the democratic process? Er, no. It’s another pack of lies.

Not always wise to remind voters about Savile ...

But he’s away with the fairies: “By Friday night, we could find ourselves being governed by a socialist Prime Minister who lost the General Election, propped up by a gang of Stalinist separatists who have secured only four per cent of the total UK vote … we could be lumbered with a five-year extreme Left-wing marriage of convenience which would lay waste to the economy and crush what remains of our civil liberties”.

Would those be the same “civil liberties” that one Richard Littlejohn has spent the past decade and a half ridiculing? As Derek Jameson might have observed, they surely would. And whose fault is it? “We now live in a fragmented political universe, magnified by a ravenous 24-hour news cycle. Everybody's in showbiz, everyone's a star”. In other words, blame social media for calling out shits like him.

And Dicky Windbag should be careful about pitching the name of Jimmy Savile: this, after all, is someone whose serial abuse of children was aided and abetted by his admirer Mrs T., who also employed noted pederast Peter Morrison, of Gents Toilets At Crewe Station infamy. That is why the right-wing press has been careful not to shout Savile’s name too loudly - and a sign of their desperation that they have now abandoned that care.

Littlejohn is reduced to lies and malicious smears - and to being a mere spectator. The million quid a year is nice, but losing influence - that hurts.
Posted by Tim Fenton at 12:29

As another Little Richard didn't put it: