Young Dave must have thought he was being jolly funny when, on being informed that Mil The Younger had been to visit comedian and campaigner Russell Brand, he denounced Brand as “a joke”. How he laughed! Jolly Good Sheow!! What Dave managed to miss, however, is that most of the (captive) audience at the firm where the Tories had staged this particular set-piece event were not joining in. 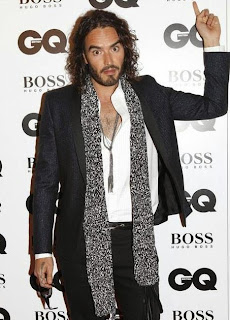 Well, Brand noticed, and yesterday he laid into Cameron over all the clearly bored workers who wanted to look anywhere but at the supposedly main event. At one point someone actually gets so fed up that he decides to pile off and leave his colleagues to suffer in silence as Dave drones on about how jolly wonderful everything is, now that he has single handedly transformed the UK’s economy, or maybe not.

Hundreds of thousands of visits have been made to food banks during the past year. Brand reminded his viewers that food poverty was something that many were brought up to believe only happened in the third world, or where there had been terrible natural disasters. But this was happening here in the UK. Poverty was there before our eyes. But Dave was laughing at the kinds of people who point it out.

“We are in year five of ‘Passionate Prime Minister’” proclaimed Cameron; perhaps this was the Royal “we”? “This job has been unbelievably fulfilling”. Yes Dave, what about all those ordinary people you’re supposed to be representing? As Brand pointed out, while Cameron called himself “passionate”, he was having difficulty holding the attention of those within a two yard radius of “his mad, shiny, painted-egg face”.


As Cameron declared that Brand was “a joke”, his audience hardly registered a smile between them. As he asserted that “This is more important … these are real people”, Brand introduced some of the “real people” that Dave hangs out with, like, er Rebekah Brooks. He let Cameron off lightly: no mention of Creepy Uncle Rupe, or the rest of the press to which he has been so indebted these past five years.

Cameron regaled his audience with tales of mountainous debt interest; Brand reminded his viewers that the Coalition had overseen a significant ramping up of debt, and that they had not cleared the deficit, as had been claimed in 2010. Dave’s next-door neighbour, the Rt Hon Gideon George Oliver Osborne, had borrowed more in three years than Pa Broon and Alistair Darling managed in 13.

Brand has almost 1.1 million subscribers to his YouTube channel, The Trews. He has millions of Twitter followers. And, for his snooty dismissal by Cameron, he subjected the PM to a merciless trashing, and on the eve of the General Election, where he had latterly intervened and urged his viewers to vote Labour in England and Wales. It’s almost as if Cameron and his entourage were determined to engage mouth before brain.

We will see, after the polls close, just how wise that snooty dismissal really was.
Posted by Tim Fenton at 15:30

I bet he didn't mention John Cleese either because he got "the joke" long ago.

Unlike poor Wickers of Guido infamy.

Dan Hodges was right all along then.

Of course he did. That's why the Tories have almost 100 seats more than Labour and they're back in No. 10 with a proper majority.

In 2020, lets make sure Labour turn to their collection of Labour supporting media, music and TV luvvies again like Brand and Coogan etc. Brilliant job you lefties with the TV connections do for the Tories.