Today’s Daily Mail front page headline was unequivocal: “Carney’s explosive intervention as number of EU migrants working here hits 2 million … BANK CHIEF: FOREIGN WORKERS DRAG DOWN UK WAGES”. Yes, now that the legendarily foul mouthed Paul Dacre had secured the election of a Government better disposed towards allowing him and his obedient hackery to carry on as before, it was time to kick migrants again. 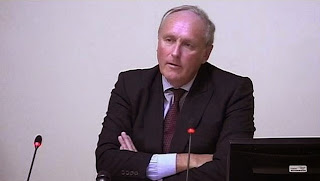 What's f***ing wrong with making up a few porkies to kick foreigners, c***?!? Er, with the greatest of respect, Mr Jay

The supporting article spelt it out: “A huge influx of foreign workers is threatening the economy by holding down wages, the head of the Bank of England warned yesterday.
In a dramatic intervention, Mark Carney said high rates of immigration helped explain why pay rises had been subdued for several years. He said sluggish earnings were a key risk to the country’s recovery from the worst recession in a century”.

There was the usual crowing from Migration Watch UK, and plenty of suggestions that allowing anyone from eastern Europe to come and work in the UK is A Very Bad Thing Indeed. So what had Mark Carney actually said? “The increase in the size of the workforce had ‘contained wage growth in the face of robust employment growth’. He added: ‘A key risk [to the economy] is that these subdued growth rates continue’”. 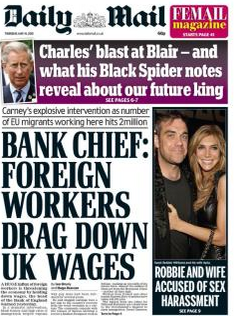 That isn’t quite in the “drag down” category, but it’s good enough for the Mail, which backs the headline and article up with Daily Mail Comment, the authentic voice of the Vagina Monologue: “As the Governor of the Bank of England points out, in a rare political intervention, this mass immigration has depressed wages - contributing significantly to the ‘cost of living crisis’ so often bewailed by the Labour Party that caused it”.

But, as Captain Blackadder might have observed, there was only one thing wrong with this idea - it was bollocks. We can say this with certainty as the BBC has today reported: “Bank of England governor Mark Carney has dismissed fears that cheap foreign labour has hurt UK productivity. His comments come amid concern that a bigger pool of available workers has dissuaded firms from investing in productivity-boosting technology”.

There was more: “older people willing to work and workers seeking more hours had added 500,000 to the labour force over the last two years, said Mr Carney. That was 10 times more than immigration, he said. Mr Carney told the BBC's Today programme that he would ‘really dampen down’ the argument that foreign workers were to blame”. And he didn’t say what the Mail’s front page headline suggests.

In fact, Carney is now talking of the need to improve productivity: “Now that spare capacity is being used up, for the economy to move forward, it's going to be a story of increased productivity”. Perhaps, whisper it slowly, there may not be enough of that extra labour that migration provides. But what is clear is that the Daily Mail has put out a lead story that bears so little relationship with reality as to be nailed a a flat-out lie.

The worrying thing about this is that it’s not the first time, and someone will believe it.
Posted by Tim Fenton at 17:00