After the FIFA scandal broke earlier this week, and the coordinated action of law enforcement agencies in the USA and Switzerland came clear in a series of arrests and extradition requests, the focus has been on one man, Sepp Blatter. He is the head man at FIFA. Yet he appears to be trying to carry on as before, even going ahead with what he no doubt hopes will be his re-election tomorrow. And it’s a pointless charade. 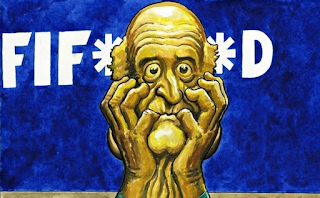 While the Guardian has noted that “Nine senior officials at the organisation, as well as five sports media and promotions executives, were charged by US prosecutors on Wednesday over bribes totalling more than $150m (£100m) over 24 years. It followed the arrest of senior officials at a Zurich hotel and the announcement of a separate Swiss investigation into the awarding of the 2018 and 2022 World Cups”, Blatter remains in place. 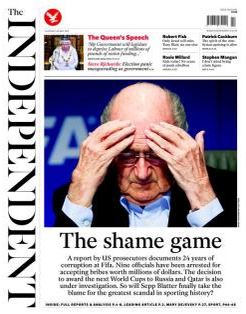 Perhaps he expects the wider world to believe that the organisation he leads can have indulged in “rampant, systemic and deep-rooted” corruption, yet somehow he is not part of it. The Swiss authorities could summon him to help them with their enquiries as soon as next week. He must be away with the fairies if he thinks that he’s going to get away with this one. In any case, the decision may be made for him. 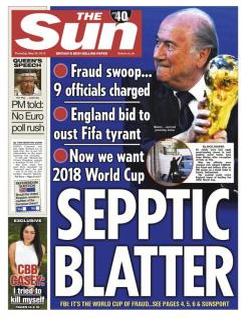 How so? “Fifa sponsors, including Adidas, Visa and Coca-Cola, are calling for the body to reform its practices. Visa issued a statement on Wednesday expressing its ‘disappointment and concern with Fifa’. It said that unless football’s world governing body rebuilds a corporate culture with ‘strong ethical practices’ at its heart, ‘we have informed them that we will reassess our sponsorship’”. That’s a threat to cut the money off. 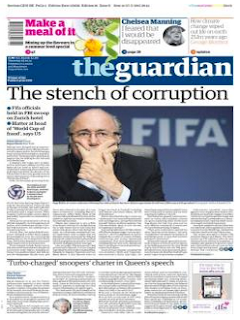 If major sponsors ditch FIFA, and other footballing organisations like UEFA decide to shun it, there is very little point in it continuing its existence. And there is only one way in which it can signal to the outside world that it is going to rebuild that corporate culture with “strong ethical practices” at its heart - Blatter has to go. He appears to be getting the hint: this morning, he “dodged an appearance at a Fifa medical conference in Zürich”. 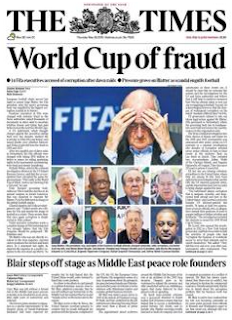 Typical of those representing national footballing organisations was Greg Dyke of the FA: “Blatter has put out a statement saying now is the time to start rebuilding the trust in FIFA. There is no way of rebuilding trust in FIFA while Sepp Blatter is still there. Sepp Blatter has to go. He either has to go through a resignation, or he has to be outvoted or we have to find a third way”. That means he has to quit today.

Dyke also pointed to the possibility that sponsors may walk away: “It will be interesting to see how many other sponsors come out and say things like this now”. Car manufacturer Hyundai is also, as they say, considering its position. There is an alternative to waiting on Blatter to go, of course - leave FIFA to implode of its own shame and start afresh. Either way, Sepp Blatter is a dead man walking.

His departure is the only way that FIFA can survive. He should be gone by later today.

[UPDATE 2 June 1800 hours: Blatter brazened it out, submitted himself for re-election, was re-elected, and began to carry on as if nothing had happened. But then something did happen.

What did I tell you? This afternoon, at a hastily arranged FIFA press conference in Zürich, Blatter appeared before the representatives of the world's press - and yes, he resigned.

As Zelo Street told last week, Sepp Blatter was a Dead Man Walking. Now he is gone. Is there more to come on FIFA? You bet there is]
Posted by Tim Fenton at 12:27

"His departure is the only way that FIFA can survive"

It probaby doesn't deserve to survive in its present bloated form. Having said that it only awaits another set of carpetbaggers waiting to allocate the squillions that the corporates are willing to spend on sporting rights.

A bit like our party politics - the highest spenders usually gain the best results regardless of the quality, or lack of, on offer.

We have seen how wealth and political power combined corrupts the press and media world - just the same in the professional sporting world.

Meet a new boss - potentially the same as the old boss? They say everyman has a price - the sums being quoted here are astronomical.

To hear Dyke and others say that their countries would not be in Quatar or Russia, would be an encouraging move.

What went under the radar was that FIFA awarded the 2026 World Cup TV rights in the US to FOX, without any bidding process and two years ahead of the start of negotiations for the rights around the rest of the world.
Blatter and Murdoch meet, he agrees not to savage FIFA for moving the 2022 to winter and in return is given the 2026 rights which may be even more lucrative if the USA win the hosting bid. That's what I read between the lines in this Bloomberg piece:http://www.bloomberg.com/news/articles/2015-02-13/fox-telemundo-awarded-soccer-world-cup-rights-without-fifa-bids

Now why does this happen, and just now. This is a sport that is not big in the USA, who don't even call it by the same name (soccer, not football).

Last week, one FIFA member, Palestine, formally asked FIFA to help because another FIFA member, Israel, was preventing Palestine football players from training, going to play matches and the like. At worst, and most unlikely, FIFA could suspend the Israeli FA. However, FIFA was investigating the matter, as it is required to do. Suddenly the USA attacks FIFA. Does Israel have any hold over the USA?

FIFA has presided over an incredible boom in the game. Why shouldn't internationals be played and the world cup based in whatever countries wish to play? Look at the success of the African Nations Cup - FIFA has done more for African self-pride than anybody else. Look how Drogba and Weah helped after civil war. FIFA has stood against any adulteration of the game; no coloured clothing twenty-minute "big bash", no FIFA approved seven-a-side, no rule changes for women. There can be and are rule changes (example - goalkeeper holding ball for six seconds) but all rule changes (after a pilot period) apply to all countries and at all levels without exception (except now that some matches can use goal-line technology. Yes, the Premiership would like its own rules.

This is not to condone any fraud (and FIFA does deals with some horrible people, but we are stuck with Murdoch), but why now, and why the USA, a country that happily bribed their way to the Salt Lake City olympics, as boasted by Presidential Candidate Mitt Romney?

there are 2 known investigations about FIFA

1) in the US regarding bribes paid to FIFA officials using US banks and US clearing houses
those happened over a decade between mid 90' to mid 00'
all those accused are part of the Central, Caraibbean and North American Football Association

even if both investigations are about corruptions, they aren't linked
and the US ones is about breaking US laws in the US rather than targetting FIFA in particular

now, there are plenty of shady deals done in the US that go unreported or brushed under the carpet.
maybe the timing (ie: just before the next FIFA Congress vote) is more than coincidental. I frankly don't know.

but what I'm pretty sure is that there aren't any US conspiracy to go after Sepp Blatter or kick FIFA with those 2 investigations
there are plenty of other ones, mind you ;)

According to the DM, Cameron has involved himself. Despite not knowing which team he supports.

Well that another feather in our cap - it's hard to keep all thes balls rolling at the same time.

VIP paedophile networks - still cover up in situ
Banker scandals - now government advisers
Media and press - dark arts
Met Police - still embroiled in scandal
Stock Exchange - open to all sorts of scams
FIFA, EUFA and even our own FA(arcical.org) have their own mess

And we have a PM who likes to give "second chances".