In the classic English heist film The Italian Job, criminal mastermind Mr Bridger decides that the gang need the services of a computer expert, Professor Peach. Bridger’s gofer Camp Freddie is not sure the Prof will play: “What if the professor’s not bent?” he asks. Bridger does not miss a beat as he retorts “Camp Freddie, everybody in the world is bent”. Well, everybody in the world of FIFA, it seems. 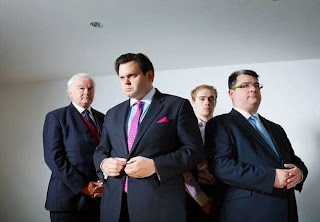 Fart in lift Inquiry picks up the scent

As the USA applies for the extradition of several FIFA officials detained earlier today outside a five-star hotel in Zürich, the realisation is dawning that all those allegations made against the organisation over the years may have been made with good reason. The whiff of organised corruption had been hanging over it for years, and the awarding of the 2018 and 2022 World Cups merely made the smell yet more rank. 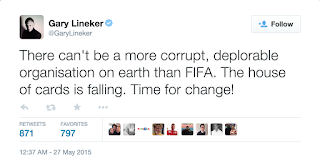 Handing the competition to Qatar, which has very little in the way of footballing tradition, and summer temperatures which, shall we say, are not exactly conducive to playing football, just put the lid on it. Gary Lineker, who knows a thing or two about football, was not surprised at today’s news: “There can't be a more corrupt, deplorable organisation on earth than FIFA. The house of cards is falling. Time for change!” 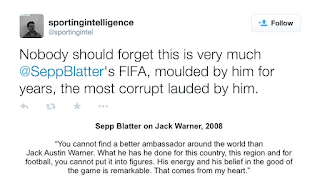 And, with the Independent telling FIFA President Sepp Blatter could be up for an interview with the Swiss Police very soon, this is one individual that nobody wants to be seen with right now, especially, as Sporting Intelligence Tweeted earlier, Blatter had been prepared in the past to lavish praise on the likes of Jack Warner, who is one of those wanted by the authorities in the USA. So who had an interesting angle on Blatter? 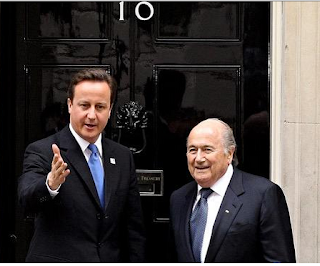 Step forward the perpetually thirsty Paul Staines and his rabble at the Guido Fawkes blog, to try and smear the Labour Party on the back of the developing FIFA scandal. First up was the inevitable dig at Pa Broon, in a post titled “FIFA Was Doomed”. Then came the equally predictable smear of Andy Burnham, in another jolly jape titled “Who’s Ya Friend, Andy?” Laugh? I thought I’d never start. 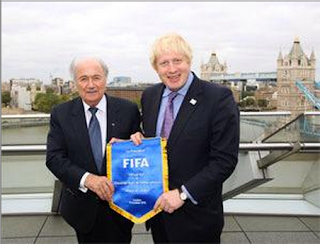 So party leaders and those who might look to succeed them should not have been photographed with Sepp Blatter, right? However, and here we encounter a significantly sized however, taking this to its logical conclusion, as Spike Milligan might have said, puts the Fawkes folks in a very difficult position. That would be because Labour is not the only party whose top names have been snapped with the FIFA chief.

For starters, there is Young Dave welcoming Blatter to 10 Downing Street. Jolly good sheow! And, as if that’s not bad enough for the Fawkes rabble, there’s Blatter at City Hall with their pal Bozza! Yikes readers!! Cripes chaps!!! Staines and his gofers are so useless at smearing, they can’t even have a dig at Labour without making themselves look daft. All that rabble working on content and it still won’t fly.

Still, keeps them occupied and out of trouble, I suppose. Another fine mess, once again.
Posted by Tim Fenton at 17:27

Slightly off topic, but Blatters old primary school was renamed after him, what an example for the kids to aspire to! http://www.panoramio.com/photo/10661860

Unfortunately, too much of professional sport has been sullied or at least soiled by the folding stuff as the rewards for better performances get higher. Add in the temptations ably supplied by betting companies allied to TV and other media operations together with the power they wield over politicians, seemingly powerless to act, and nothing is really surprising in these revelations adding to other recent controversies in cricket, athletics and cycling.

It will be interesting to see how Murdoch & Co play this as surely they must have had some knowledge, and acquiesced in (?), of what was going on when bidding for TV rights?