While some in the media concentrate on the issues - well, a few people have to - rather a lot of the hacks and pundits are scouring the by-product from the 24-hour rolling news Speculatron. And the latest discovery is that Mil The Younger has apparently declared that he is going to have Labour’s six election pledges literally set in stone, so that if elected, the stone will be placed somewhere it can be seen by him every day. 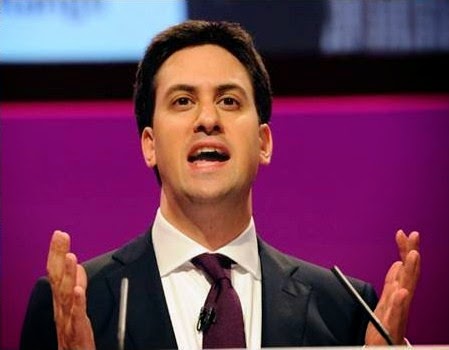 This has generated much derision among the cheap media seats, but then, so did the “Woman to Woman” campaign and its “Pink minibus”. Miliband’s visit to talk to Russell Brand was also slammed. Neither has harmed his poll ratings, despite the column inches devoted to slagging him off. Someone in the Labour Party has discovered that, in this contest, no publicity is bad publicity.

The “Pledge Stone” is also generating much of the kind of reaction which reflects more on the shortcomings of those reacting than on Miliband. And someone out there has either not bothered to engage brain before sneering, or has just cast discretion to the wind and decided that they don’t have to bother about comparing a Jewish politician to Moses, who, being a figure from the Old Testament, was, er, Jewish. 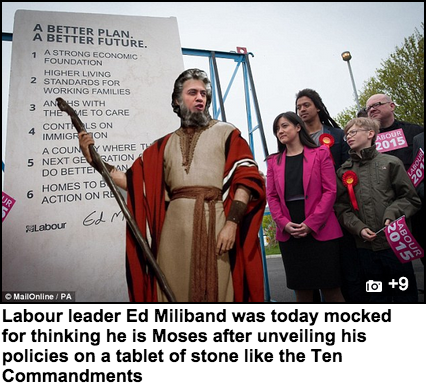 The Mail ... just engaging in a little light banter

Veering across the antisemitism line has been something that part of the Fourth Estate has been unable to resist when it comes to their desire to demonise Miliband. We had the Mail telling “We do not maintain, like the jealous God of Deuteronomy, that the iniquity of the fathers should be visited on the sons”. Then there was Simon Carr, who writes Parliamentary “sketches” for the Guido Fawkes blog.

Carr was unabashed as he told that Miliband “dances at the despatch box like a spastic marionette … his convulsive string master taking another swig of the meths” (1930s Nazi stereotypes revisited, much?). On another occasion he talked of the opposition leader as “other-worldly” and “crucifixion material”. The path of some trying to take the piss over the “Pledge Stone” has gone there too. 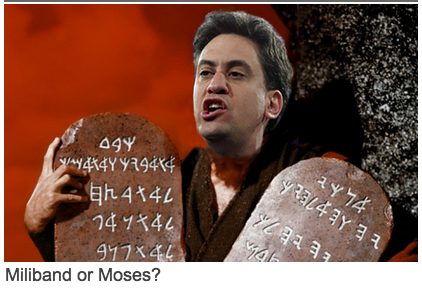 The Telegraph ... just having a bit of fun

The Mail has pictured Miliband with a substantial beard, not that they’re trying to suggest anything particularly Jewish, you understand, as well as trowelling on the “Moses” parallel, because, er, they can. The Telegraph uses a photoshopped image which has Miliband’s head on a character holding the stone tablets. So that’s Mount Sinai and another Jewish biblical reference, although of course it’s only a bit of fun.

Meanwhile, the six pledges made by the Labour leadership have been given more free publicity than even the most optimistic party spinner could have dreamed of. And that free publicity is being awarded to Labour by papers that have either declared for the Tories, or who will declare for them before Thursday. Thus the idiocy of the right-wing press - giving Miliband both free publicity, and another stick to beat them with.

The finest minds of Fleet Street - and they can’t even organise a smear properly.
Posted by Tim Fenton at 14:17