When it comes to the long fight for ordinary people to secure what we often take for granted – decent health care, universal and free education for all, workers’ rights including the ability to organise and bargain collectively, non-lethal food, breathable air, clean and disease-free water, and a welfare safety net, the tired but true saying applies: those that do not hang together are hung separately. 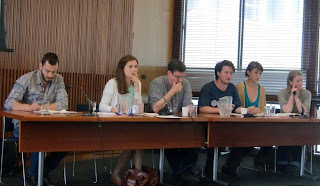 Thus was sparked the rise of the Trades Union movement, and sustained it through over a century of political upheaval. In the UK, that movement still claims around six million adherents, and, as the March For The Alternative demonstrated, can still put around half a million people on the streets of London. There is no other comparable movement in the country.

It was with this in mind that I watched and listened to a panel discussion (and subsequent Q&A) at last Saturday’s NetrootsUK gathering, which took place at the Trades Union Congress HQ in central London. The New Ground Rules For Activism was chaired by Rowenna Davis, with Newsnight political editor Paul Mason giving his observations on recent activist phenomena.

Also on the panel were representatives of Occupy, the Green movement, 38 Degrees, and UKUncut. And it was the attitude of Danni Paffard, representing the last named, that set my alarm bell ringing long and loud. In a gathering made possible by the Trades Union movement, she asserted that many involved in UKUncut did not see unions as particularly relevant.

This may have come as a surprise to all those union members who had not merely sympathised with many of the UKUncut actions, but also joined in with them. Was Ms Paffard talking about an attitude among young people she has encountered? Was this merely a personal opinion? UKUncut has certainly had an impact in the recent past, as Paul Mason observed. But by itself it is going nowhere.

Publicity stunts, such as the Fortnum and Mason occupation or action against Vodafone stores, grab the attention of media, and through their lens the public. But for those who want to bring attention to the corporate tax affairs of some of the world’s largest corporations, a genuine grassroots organisation and its resources are needed to move things forward.

Apparently UKUncut actually work with unions such as Unite, which will come as a relief to those who sympathise with their aims. Because any idea that the Trades Union movement isn’t relevant today – and I would argue the reverse, if anything, is true – is as surely a precursor to another PFJ moment as night following day, and needs to be addressed by all parties, for reasons that should be obvious.

Because there is no shortage of interests ready and willing to hang them separately.
Posted by Tim Fenton at 18:46