The press empire of Richard “Dirty” Desmond is no stranger to flirting with fringe political parties, as watchers of the Daily Star – the Sunday version of which was the preferred choice of the perpetually thirsty Paul Staines (aka Guido Fawkes) as a vehicle for getting his word out to the masses – will know all too well. February last year brought a nadir in that paper’s infamous courtship of the far right. 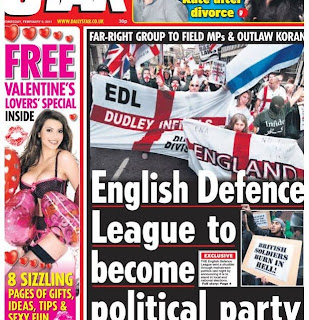 It was then that the Star ran its “English Defence League to become political party” front page, talking up the EDL and its leader Tommy Robinson (aka Stephen Lennon) and asserting that, in a phone poll – no methodology or other background was released – the paper’s readers had registered a 98% support for the group. The EDL is virulently Islamophobic.

Daily Star editor Dawn Neesom naturally denied any suggestion of Muslim bashing when she appeared before the Leveson Inquiry, but her appearance cannot have been made any easier, coming as it did after her former freelance Rich Peppiatt had appeared and told in no uncertain terms that the Star was looking to demonise Islam whenever it got the chance. 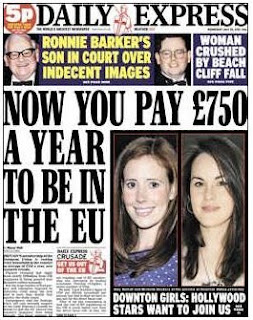 Now, though, the supposedly flagship title in Desmond’s newspaper portfolio, the Daily Express, is also flirting with a fringe political party, and by no coincidence at all it is one out on the right: yes, Des’ finest are cosying up to UKIP, home of rabid Europhobia and mainly popular through the blokish populism of Nigel “Thirsty” Farage. Yesterday the paper lurched closer to backing UKIP outright.

“Now You Pay £750 A Year To Be In The EU” screamed the headline. But the “new research” that “reveals” this figure has come from UKIP propaganda, specifically confirmed Eurosceptic and UKIP leadership candidate Tim Congdon. So not only is the Express getting quotes from the party’s MEPs on a regular basis, it is also recycling its propaganda as if it were fact.

Take this gem: “Figures released last night show nearly £20billion from UK taxpayers is being poured into Brussels coffers annually. But the huge burden of bureaucracy and regulation imposed by Eurocrats could mean the true total is more than double that amount, the study warns”. Really? No, not really: the net contribution from UK to EU for 2012 is €5.4 billion, or £4.23 billion at current exchange rates.

As to the “huge burden of bureaucracy and regulation”, that will no doubt be defined by the same party whose leader claims that around 70% of UK law is imposed by “Brussels”, when less than 20% results from EU laws and directives. But the real news is the steady move by the Express to openly support Farage.

Is some kind of idealism at work here? No chance. The sole reason is to prop up the paper’s dwindling circulation, and thus another Benchmark Of Excellence.

[UPDATE 1345 hours: as @dailyexpresslol has pointed out to me, the Express' "chief political commentator" Patrick "Lunchtime" O'Flynn has also recently addressed a UKIP gathering at Frimley, telling his audience how the party's meetings are getting bigger and bigger turnouts while other parties' events are said to attract less and less.

He then talks up UKIP enthusiastically and talks of a "perfect political storm", thus confirming not merely that his paper is shilling for Farage and his fellow pub bores, but also that he is starting to believe his paper's own propaganda. When the paper you write for exaggerates the size of the UK's contribution to the EU by a factor of five and suggests it's really twice that, you're taking a serious detour from the path of reality.

Still, at least O'Flynn is still in a job. Until the next Desmond economy purge]
Posted by Tim Fenton at 10:58

I suppose that Richard Desmond sees himself following in the steps of Beaverbrook. Don't forget Baldwin's descriptions of him and Northcliffe as both seeking the harlot's preogative and not the sort of men I would have in my house.