The business of Twitter followings, and the apparent lack of soundness of some politicians’ numbers, continues as Political Scrapbook has unearthed a suspiciously large rise in the following of publicity seeking Tory MP Louise Mensch. But an earlier Scrapbook target, housing minister Grant Shapps, has now come before the examination of Zelo Street, and his numbers are equally revealing.

Shapps, while holding down a ministerial portfolio, manages to do an awful lot of following and unfollowing on Twitter. Scrapbook recently asked “Is Grant Shapps Using A Robot To Get More Twitter Followers?” but the scale of the numbers was not dwelt upon. When his numbers for the past month are put under the spotlight, however, you can see he couldn’t be managing this in person. 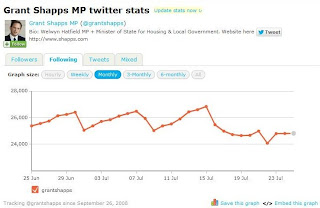 Of particular interest to me was the number he was following, as this is an activity the account holder would be expected to do themselves. Looking at Shapps’ listing shows that his account followed an additional 184 users between June 25 and 26, and then followed another 189, 396, 102 and 161 over the next four days. And the day after that, his account unfollowed a whopping 1,360.

Then, after adding 19 and 320 over the next two days, 917 were unfollowed before 726 were added to the list of those followed the very next day. The chance of Shapps having accomplished these tasks himself is not unadjacent to zero. 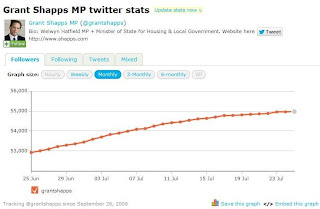 And what of the effect on the Shapps Twitter following? This, in the meantime, showed a pleasingly upward trend, from around 53,000 to around 55,000, no doubt propelling the account’s owner onwards and upwards into the stratosphere of Parliamentary Tweeters.

So the answer to the Political Scrapbook question appears to be a resounding “Yes”. Perhaps it is time for the housing minister to come clean about how his Twitter account manages such an enormous number of follows and unfollows while its owner goes about his full time job.

[UPDATE 30 July 1040 hours: Grant Shapps has spoken to the Welwyn Hatfield Times, which has proclaimed that he "has denied using software to boost the number of followers to his Twitter account". He is quoted as saying "No-one else has access to my Twitter account ... and the decisions as to who to follow are entirely mine".

That's a very careful selection of words, but it does not explain how he manages to follow or unfollow hundreds of other accounts in a single day - the sequence above includes two days when he unfollowed well over 1,000 - and how he could find hundreds of people who have, in his words, "something interesting to say" while he is holding down not merely an MP's job, but a Minister's.

Shapps is not buying followers, and nor is anyone buying them for him: no such suggestion is made. But the impression remains that there is a script running in the background that follows and unfollows others in a way that builds up his follower numbers to a level it would not otherwise merit]
Posted by Tim Fenton at 16:06

I always wondered why he followed me, and then unfollowed me a crew weeks later. Thanks. Keep up the good work.