Nobody should be surprised at the faux whining from right-wingers this morning following yesterday evening’s Olympics opening ceremony. As soon as those lights spelled out GOSH (Great Ormond Street Hospital) followed by NHS, one instinctively knew that some out there on the fringe would take offence. That the one stupid enough to stick his head over the parapet was Aidan Burley surprises no-one. 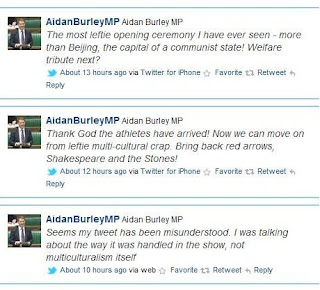 Burley’s Twitter outburst comes from someone whose recent political career presses all the buttons of the New Conservatism: he was a Hammersmith and Fulham councillor, he’s allied himself with folks from the Young Britons’ Foundation (YBF) in taking part in the Trade Union Reform Campaign (TURC), which does not seek to reform unions but wipe them out, and has been sacked for a Nazi themed stag party.

Groups like the YBF routinely teach that the Tory Party is not Conservative enough, and like the groups in the USA on which it bases itself – such as the Freedom Association and Young America’s Foundation – it majors in educating and placing ideologically sound Conservatives into business and politics. And this is increasingly a problem for the Tories.

The Tory Party has always – of necessity – been a broad church. The Party has recognised the need for compromise not merely with other parties and interest groups as it seeks to influence opinion and pass legislation, but also within its own ranks. This ability to accommodate a range of views is in direct conflict with the ideologues, for whom no compromise is permissible.

So for those people, nothing, but nothing, can be said to be good about the NHS. Anyone saying otherwise must be shouted down and ridiculed. This is both a rite of passage for aspiring New Conservatives, and a duty for established players. Burley is now one of the latter. He is merely reacting as trained.

Burley complains about rappers – see his less than successful attempt to convince in a Sky News interview HERE – yet there was only one, Dizzee Rascal, who was born close to the Olympic Park in Bow. He whinges about multiculturalism, and couples it with all things “leftie”. He expresses dismay at seeing the CND symbol, but misses the huge following the movement enjoyed in the 60s.

After all, in 1963 there was a fortunately brief look into the pit, when the USA and USSR came frighteningly close to what would have been nuclear war, over the Cuban missile crisis. Danny Boyle’s production included not merely progress, but also protest, something that sets us apart from the Chinese. That one of the most prominent New Conservatives has a problem with protest is instructive.

The intolerance of the New Conservatism will be its downfall. Hopefully for the rest of us this will happen before this poisonous strain gets its hands on the levers of power.
Posted by Tim Fenton at 17:06