Last week, a news item told that all of the Greenland ice sheet had been subject to melting of its surface, and that this was a most unusual event. Both statements are factually correct, and reports also stressed that this was not suggesting that the whole of the ice sheet had melted – after all, this is around 3km thick in places. But that was sufficient for the denialist brigade to kick off. 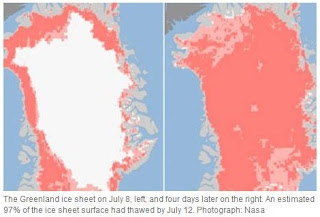 Quickly manning the barriers were the people at Fox News Channel (fair and balanced my arse), proclaiming “Skeptics put the freeze on NASA ‘hot air’ about Greenland ice”. Fox gave World Climate Report and Anthony Watts equal prominence to NASA in their report. The impression was clearly given that some kind of misinterpretation and scare had been perpetrated.

That this is the official denialist line has now been confirmed by Christopher Booker and James “saviour of Western civilisation” Delingpole, sorcerer and apprentice of denialist pot-stirring at the Telegraph, who have as one put up the strawman argument that there is a scare, before knocking it down by saying that there isn’t, which anyone who was interested would have known anyway.

Booker asserts “These Nasa pictures, we were told, showed alarmingly that, for the first time in history, the surface ice was melting right across Greenland. It took only hours for this scare story to be blown apart”. He continues “A tiny rise in air temperatures had momentarily taken them just above freezing, enough to melt a few inches of surface ice”. Spot the mistake?

The story that surface ice was melting across Greenland had been “blown apart”, but there had been melting of “a few inches of surface ice”. Right across Greenland. And the “momentary” temperature rise lasted several days. Perhaps Del Boy can manage a more convincing tack? Well, sadly, no he can’t: his first stab is to accuse the BBC of saying that “97% of Greenland has melted”. Their report says not.

Then Del tells his adoring readers (Sid and Doris Bonkers) that “The right thing to do on occasions like this, I find, is to head straight for Watts Up With That? Unlike, say, the BBC, or the Guardian, or the Independent or most of the rest of the MSM, WUWT's posts are grounded in actual science and real world data”. To which I have to point out to him that Anthony Watts’ site might not be totally reliable.

Watts features guest posts from a particularly combative denialist called Steven Goddard. These are considered authoritative. But Zelo Street has caught Goddard making elementary mistakes such as not being able to distinguish between temperatures and temperature anomalies. He is, as those of us from God’s Own County tend to say, all wind and piss.

Not that I’d want him to rain on the Booker and Delingpole parade, of course.
Posted by Tim Fenton at 13:19

Check out Goddard's latest contribution to the 'modern temps are nothing special' debate. In order to put current warming (confirmed today by Muller et al), Goddard draws a graph with a 400 000 year X-axis.