Gilligan On The Way Out?

Word has reached Zelo Street that the Maily Telegraph’s most notorious purveyor of dodgy journalism may have suffered a reduction in his status: it appears that Andrew Gilligan has served his purpose, and now that London’s occasional Mayor Alexander Boris de Pfeffel Johnson has been duly re-elected, he is no longer the “London Editor”, at least not of the weekday edition of the paper. 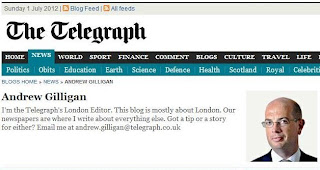 Spot the reduction in status, from here ...

The thought that Gilligan was only given that title to legitimise his attacks on former Labour challenger Ken Livingstone has entered after an updated job description appeared on the Telegraph’s site recently. Here, he is pointedly referred to as “London editor for the Sunday Telegraph” rather than his own choice of “the Telegraph’s London Editor”. 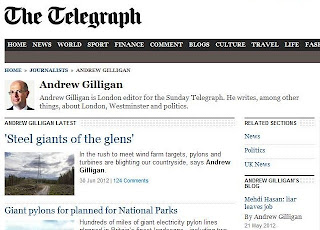 Is this merely a minor inconsistency? Well, no it isn’t: Gilligan’s blog for the paper, following the Mayoral election and its aftermath, has featured only two posts, and one of those was a self-justifying kick at Mehdi Hasan, with no entries at all for well over a month. He has only featured once in the paper’s London coverage since that election, in a formulaic piece on Olympic traffic congestion.

When Bozza opened his latest jolly good super whizzo addition to the capital’s transport network, the much vaunted Cable Car, last week, Gilligan was nowhere to be seen. Instead, the Telegraph had to turn to freelance hack David Leafe to put together a piece and get the quotes from their other columnist, who just happens to be Mayor in his spare time.

Gilligan hasn’t even managed an anti-HS2 propaganda piece for a good three weeks now. With London gearing up for the Olympic Games, one might imagine that anyone with the title of “London Editor” would be generating rather more copy on the subject. Instead, with less than a month to go before the opening ceremony, he is nowhere to be seen.

Perhaps Gilligan has been deployed elsewhere. But, whatever the reason, it’s becoming clear that his status as the Telegraph’s “London Editor” has, by the most miraculous of coincidences, diminished rapidly following Bozza’s re-election. As have the attacks on not only Livingstone, but also Lutfur Rahman, who is still the Mayor of Tower Hamlets.

Perhaps the Telegraph’s senior staff would like to keep quiet the inconvenient fact that, after all the postal vote allegations made against the borough, the majority of postal votes in the Mayoral contest were cast for Bozza, and so if anyone benefited from that arrangement, it was their own pundit. With Gilligan quietly sidelined, they can expect to get away with not having to explain that one.

Having outlived his usefulness at the Tel, what next for the great Gilligan?
Posted by Tim Fenton at 11:52