Level Crossings – Don’t Even Think About It

Once again, a motorist has died following a collision between a car and a train on a level crossing: this one was reported by the Sun yesterday, the accompanying photo showing all too clearly the unequal contest between a car with a mass of just over one tonne, and a four coach train with a mass of over 151 tonnes. Not for nothing is there a move to eliminate level crossings over time. 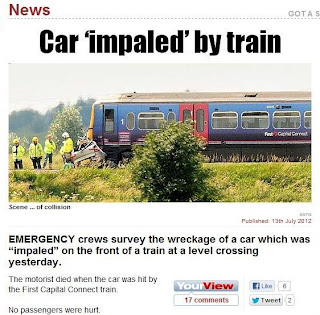 This is in the best interests of both road and rail: on occasion, motor vehicles can cause derailment of part of a train, as happened in the collision at Ufton Nervet level crossing in 2004, and that subsequent to Gary Hart falling asleep at the wheel of his Land Rover on the M62 and driving on to the East Coast Main Line (ECML) in the path of a London bound express, in 2001.

And those believing that having a EuroNCAP safety rating somehow makes their vehicle impervious to a hit from a 100 tonne locomotive should bear in mind what happened to the Renault Espace used in the Network Rail (NR) demonstration that was subsequently featured on Top Gear, with characteristically witless commentary from Jeremy Clarkson.

Here, a 50 year old diesel locomotive travelling at around 60mph struck the Espace more or less side-on, and the slo-mo replay demonstrates that anyone in the passenger compartment would have been killed instantly as most of the vehicle above the floor pan disintegrated. The locomotive remained on the rails, although there was a significant amount of ballast throwing.

Perhaps you have what you believe to be a bigger and harder SUV than the Espace? Don’t you believe it: above floor level, nothing else would fare any better, and that’s where the driver and passengers would be. Modern cars are designed to allow their occupants to survive the kinds of accidents that happen on roads, including roll-over and side hit, but nothing protects against a rail vehicle.

So remember, folks, don’t even think about arguing with a moving train. You aren’t going to win that one, whatever you’re driving.
Posted by Tim Fenton at 11:52