There is, the great Chief Inspector Clouseau once said, a time and a place for everything. Sadly, like Clouseau himself, some right-wingers find following this advice easier to talk about than to do, as a scan of the mixture of ineptitude, ignorance and sour grapes during and after yesterday’s Olympic opening ceremony shows all too well. 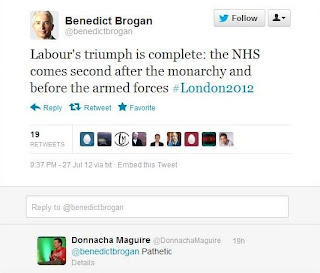 The examples came in thick and fast, typical being Benedict “Famous Last Words” Brogan of the Maily Telegraph who began “Labour’s triumph is complete”, which is an interesting reinvention of “lost a General Election two years ago”. 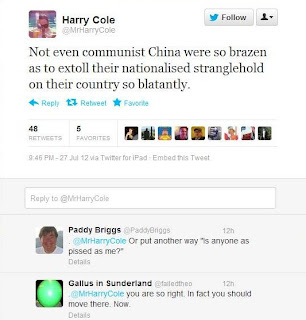 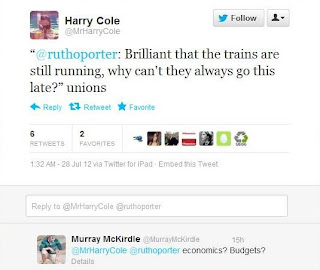 Always reliable for buffoonery in these things is the flannelled fool Henry Cole, who started by trying to ape Aidan Burley, then fell back on blaming unions for trains not running late on, despite management running the trains. It was management who cut back the hours services ran, such as Christmas services, which ended in 1964. 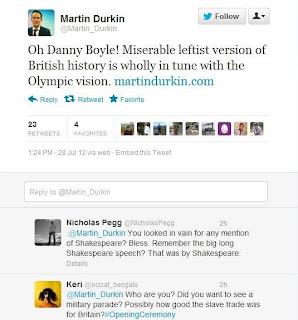 Martin Durkin tried “Miserable leftist version of British history”. Like Brunel and Berners-Lee are “leftist”. He is a truly miserable git. 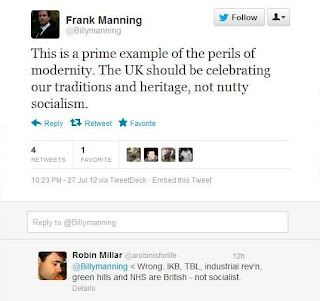 Meanwhile, looking in from his freedom-giving trip to the USA, Frank Manning saw something less than ideologically pure, so labelled it “nutty Socialism”. What a prat. 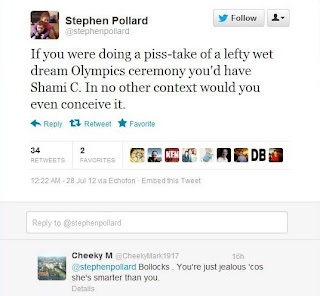 Stephen Pollard of the Jewish Chronicle railed at the presence of Shami Chakrabati, but somehow managed not to spot Maestro Daniel Barenboim (not easy). 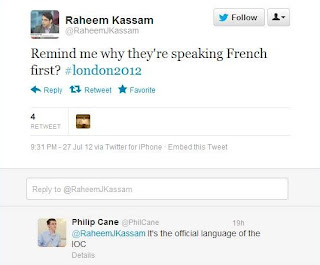 Raheem Kassam showed how incredibly knowledgeable he is not, by being forced to ask “Remind me why they’re speaking French first?”. A word in your shell-like, RK: the bloke who brought us the modern Olympics was Baron Pierre de Coubertin. He was from France. Where they speak French. Have a think about it. 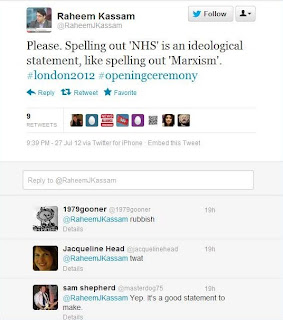 Then he asserted that NHS was a synonym for Marxism, which will be why no Conservative PM, starting with Winshton, has even considered dismantling it. 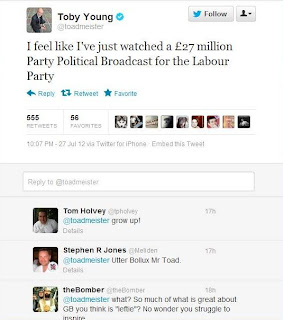 And finally comes the loathsome Toby Young, whining “I feel like I’ve just watched a £27 million Party Political Broadcast for the Labour Party”. Yes, celebrating the country’s history and achievements, rather than having a good gripe, is so rotten and leftist, isn’t it?

Some right-wingers can’t get over that last night was quirky, maybe over-long, and occasionally tedious, but it was also feel-good, inspirational, and at times brilliant and downright cool. It showed that we’ve got feelings, but also real style, and a sense of humour. Ah right, now I see where the righties have their problem. As you were.
Posted by Tim Fenton at 18:55

There were plenty of idiotic lefty gripes on Political Scrapbook's comments, sadly. I'm glad to see you present some balance.

At the Beijing Opening Ceremony the actors and musicians were drilled to uniform perfection: everyone was just a (replaceable) cog in a machine. In London, it bristled with eccentric individualism and personal energy.

Surely that is the context in which these right wing folk would have loved it? Not that you can credit them with that much insight.