Today is that flip side of the warm summer day, the showery aftermath. But yesterday was the kind of summer Saturday of fondest memory: high, strong sunshine, a little breeze, and fewer clouds as the afternoon wore on. Maybe the benefit of this interlude was not felt everywhere in the UK, but then, Cheshire does benefit from its position well away from the effect of anything coming off the cold North Sea, while being sheltered from the Atlantic approaches. 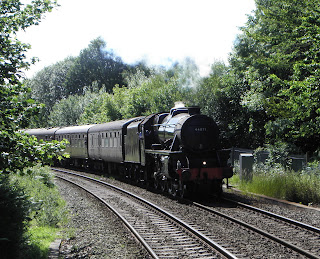 The day can be summed up in this photo taken during the afternoon at the wayside station in the village of Mouldsworth, a few miles east of Chester, and on the fringe of the Delamere Forest. Returning to the other side of the Pennines in the stately manner one would expect of times past, a charter train hauled by a steam locomotive rumbles past the trees and hedgerows. The idyllic scene is not from idealised memory, but very much of the present day.

Having the city of Chester as a destination may also have sold the tour to some of the participants. There are some photos of Chester HERE, in case you’re not familiar with the place.

"Having the city of Chester as a destination"

Except the City of Chester no longer exists and has been replaced by the Borough of Cheshire West and Chester.

@1, I commend your capitalisation.

Administrative areas come and go, but Chester is still a City ... or is that city?