Seven and a half miles up the Colne Valley from Huddersfield, the village of Marsden managed to cling on to its train service – just – as closures swept through the network at the end of the 60s. Now, the hourly Manchester bound trains call at a new and accessible platform, from which it’s downhill all the way to the Brewery Tap, a pub overlooking the river in the heart of that village.

There was also the realisation that returning to the station would mean walking back up that same hill, but first came the locally brewed ale, which kept up the day’s impressively high standard. Added to the mood of satisfaction was the presence of a fish and chip shop (with rather good mushy peas, Baron Mandelson please note), fitted in with ease as the trains were by this point only hourly (there are two an hour between Leeds and Huddersfield).

Joining a crowd of several dozen on the platform, we caught the next train through the three dark and damp miles of Standedge Tunnel to Greenfield, where the pub was not only easily identified (The Railway), but just across the road from the station. 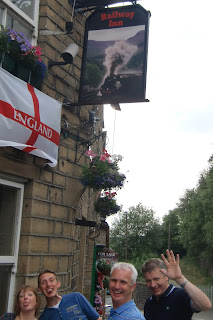 A pose of little inhibition, accompanied by the inevitable Ingerlundflag
Yes, the beer was as good as before, a contrast to those times in the early 70s when CAMRA was starting out, and real ale was a hit and miss affair, with the best kept and served tipples in a rather small minority. The present consistency should keep this Ale Trail popular, although the warm and dry weather might also help.

As the afternoon wore on, so the last stop approached. And, when it comes to real ale and railways, all trails lead to Stalybridge. The station bar was at the centre of a long and difficult campaign for its survival in the 80s, from which it has emerged more popular than ever, and deservedly so. 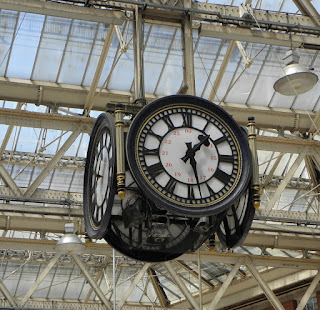 OK, it’s Waterloo, but you get the idea
Thus the trail ended: as with the characters in Brief Encounter, we were constrained by the still punctual arrivals of the trains. I had to get back to Crewe, while three of the other not unwilling participants were headed for Chester. It was a grand day out, recommendable without hesitation, and we just might be up for a re-match sometime.