And so we arrived, in a pleasantly mellow state, in Huddersfield, where the magnificent (and listed) station frontage is home to two watering holes. Out front, the car park has been removed, and the traffic much reduced, from the time I lived and worked in the town in the late 80s.

First bar to be sampled was the King’s Head, which used to be called the Station Tavern. In that latter guise, the ale was not “real”, and Thursday evenings were only busy as there was a visiting jazz band. Now, the place is much more rough and ready, but the beer is excellent. 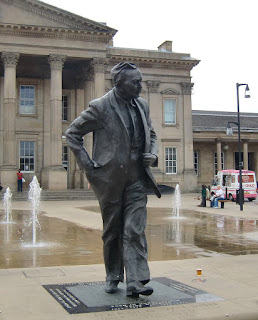 We walked around the square with its life size sculpture of former PM Harold Wilson, who won four General Elections, though two were close calls, and in a third, he failed to get a majority. But he did oversee the establishment of the Open University. 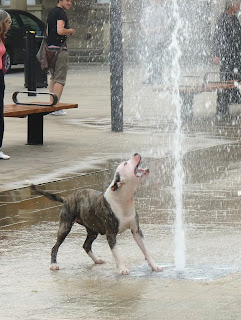 Behind the Wilson statue is a water feature, several spouts making up a fountain which powers itself on and off seemingly at random. 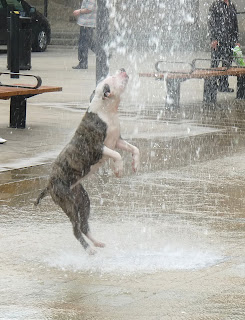 This caught the eye of someone’s pet dog, and that then provided the entertainment for a few minutes, as the dog got very wet, but failed to figure out the water jets. 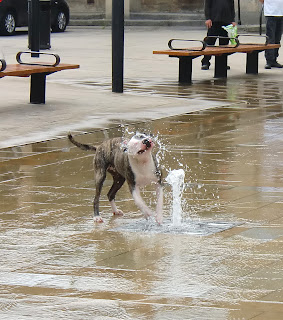 Then we moved right along to the Head of Steam, which occupies the opposite end of the station building to the King’s Head. The place has a pleasant interior, there are a number of little nooks and crannies, there are comfy sofas to relax on, but the beer was a terrible disappointment. And it wasn’t just one ale: the group sampled two or three.
Maybe the next pub would do better? As the clock ticked round to half past the hour, we boarded the next stopping train for Manchester, eager to find out. By now, there were several others making the same journey. This ale trail thing is catching on.